Noize is photography, parenthood, music and culture inspired by Michigan.

Creative weirdo. Lucky to be loved by my man, son Rune, daughter Magnolia, and dog Luna the Nut. @zumapress photog and Etsy seller in Michigan

Our poor family has been sick for the last 3 weeks

I think Lola should audition for the role of Coset

Here are a few more photos from Clawson’s #hallo

#happyhalloween2022 from #pikachu and the #itsybit

I was driving through #royaloak this morning and s

Yay @yatescidermillmi is heavenly. They have #cide

I can’t believe how big this boy is! He is our #

And when I see you smilin’. Well it sets my hear

When my music photos get published I don’t alway

#kiddos w their #pumpkins #bluey and #peppapig or

Today is fun and it’s #fall. First we went to @g

Our #littledollface is ready for #fall in her cute

Creative weirdo. Lucky to be loved by my man, son Rune, daughter Magnolia, and dog Luna the Nut. @zumapress photog and Etsy seller in Michigan

Our poor family has been sick for the last 3 weeks

I think Lola should audition for the role of Coset

Here are a few more photos from Clawson’s #hallo

#happyhalloween2022 from #pikachu and the #itsybit

I was driving through #royaloak this morning and s

Yay @yatescidermillmi is heavenly. They have #cide

I can’t believe how big this boy is! He is our #

And when I see you smilin’. Well it sets my hear

When my music photos get published I don’t alway

#kiddos w their #pumpkins #bluey and #peppapig or

Today is fun and it’s #fall. First we went to @g

Our #littledollface is ready for #fall in her cute

PART ONE: THE INTERVIEW

Anika had worked as a political journalist and as a music promoter before crossing paths with Portishead producer, Geoff Barrow. A friend told Anika that some guys were looking for “a weird singer” and unbeknownst to Anika, she would soon be a professional touring singer with a new album produced by Geoff Barrow and backed by the band Beak.  Her sound is an ingenious mix of punk, funk, pop, dub, and electronica. In preparation for the Detroit show, Noize got the chance to ask Anika a few questions.

How has your tour experience been so far in America? How does it compare to performing in Europe? What is your impression of the American music scene?

So far it has actually been quite a pleasant one. People have been really enthusiastic and seem to get it. There defiantly seems to be a strong interest and support for the industry in the US. I found Canada quite similar to the UK. An emphasis on bar decoration and graphic design. It’s strange how the two compare. Overall it’s been good.

What parallels have you found between singing and political journalism?

I find that with singing I have more of a platform than when I was a political journalist. Journalism demands impartiality and balance, with less scope to interact and so as a musician, I feel I have more room to move around. It’s a good position to be in.

Which current events interest you today?

The state of Higher Education in the West and the reduced priority of the Arts in the West. Both confuse me greatly. Arts funding has been significantly slashed in recent years, with the justification that it brings in less immediate capital/returns. This I just find extreme short-term thinking. UK Higher Education has seem drastic reform in the the last few years. Whilst in Berlin, I was working as UK Science and Education Correspondent, focusing on Higher Education policy reform. It’s an area I feel quite strongly about. I am a child of the Blair years, where an over-emphasis on access and course universality, really shattered the entire Higher Education system. The UK is now full of graduates, with no work experience, a lack of confidence and a £40,000 debt, working in McDonalds.

My old university lecturers. We’d dissect every stereotype and framing within the mainstream media and question why certain characteristics or floating signifiers had been attached to particular objects or things. There was an emphasis on the course, to question everything. I was also brought up to question things and take interest in things. I think it helped growing up in a multi-lingual household because you have that slight distance from culture, sitting on the periphery, which gives far more insight and therewith autonomy.

In past interviews you have mentioned that sometimes music is made for the wrong reasons. Why do you enjoy making music?

Yes I really enjoy it. Previously, I didn’t really imagine performing in front of people. I’ve always written as a form of release and experimenting, merely for myself and my own sanity. What I’ve found is that performing the material is actually far more fulfilling because people can engage and make you question your own conclusions.

Are there any life experiences that have helped to shape your music and who you are today?

Many. Many long stories. For another time. I think the main thing is to not be scared of taking risks. Calculated risks. I have had some rather varied and random experiences in my life, which seem unusual for someone of my age.

Lastly, the questions I like to ask everyone…Top 2 artists or groups that you find relevant? Favourite foods? Favourite place to travel that you have already been or would like to go?

Really good vegan food or a complete opposite, I love sushi. Usual musician food. I used to like other things but as a singer, you have to steer clear of heavy food and your palette changes/adapts.

Places: Still so many places I want to go. I want to take some time out and take pictures. Just observe for a bit again. Best way to learn I always find.

Anika’s choice of venue was superb. The venue chosen was the Cave in the Russell Industrial Center in Detroit. The Russell houses over 150 artists and tenants in its fortress of buildings that used to be factories but are now wide-open warehouse spaces. There were 4 Performances that night: Anika, Slowdance, Paul Bancell and Turn to Crime.

ANIKA
Anika’s music is ridiculously catchy. Rolling Stone recently acknowledged the new album as “A fascinating amalgam of cover versions and heavy post punk dub…enormously impressive 4.5 out of 5”  I find myself listening to her music over and over again which leads me into mumbling/singing on a daily basis a jumbled medley of the album’s lyrics about someone telling me I am the one they “want to be with” (Terry) “I hate you! I hate you!” (Ying Yang) and “I go to sleep, sleep, and imagine that you’re there with me.” (I Go to Sleep)

I was curious to see how the album translated into a live performance. The live performance was indeed similar to the sound of the album. That night Anika’s unique low voice and deadpan delivery were perfect for the vibe of the music. Her poised yet mysterious demeanor incited a certain amount of natural curiosity from the crowd because despite the intimate venue, Anika sang the entire time with little interaction with her band or the audience. I appreciated this because the music and the aura of the sounds have such a specific vibe that are best delivered without distractions. Anika was in control of how her music was presented in order to get across the feel of the music which showed that she has good instincts. Anika’s band did a good job at creating a myriad of sounds with simple instruments. I thought the drummer was especially good. Overall, the music was dark, moody, groovy, sensual, and melodic. The night ended with an inventive cover of The Talking Head’s song “Once in a Lifetime”. 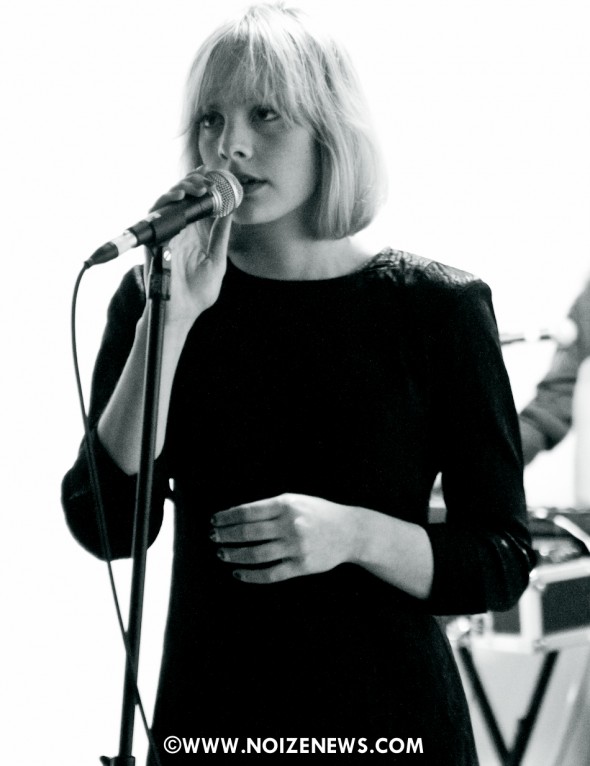 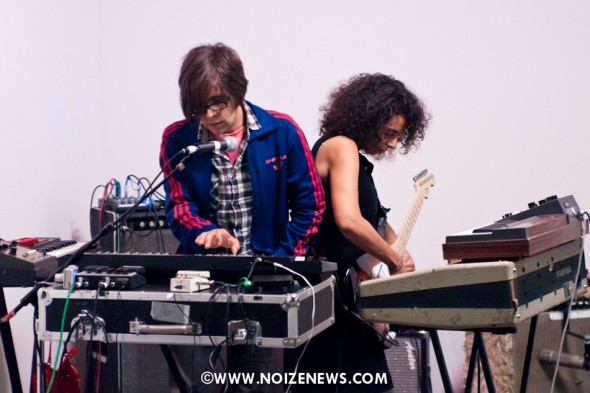 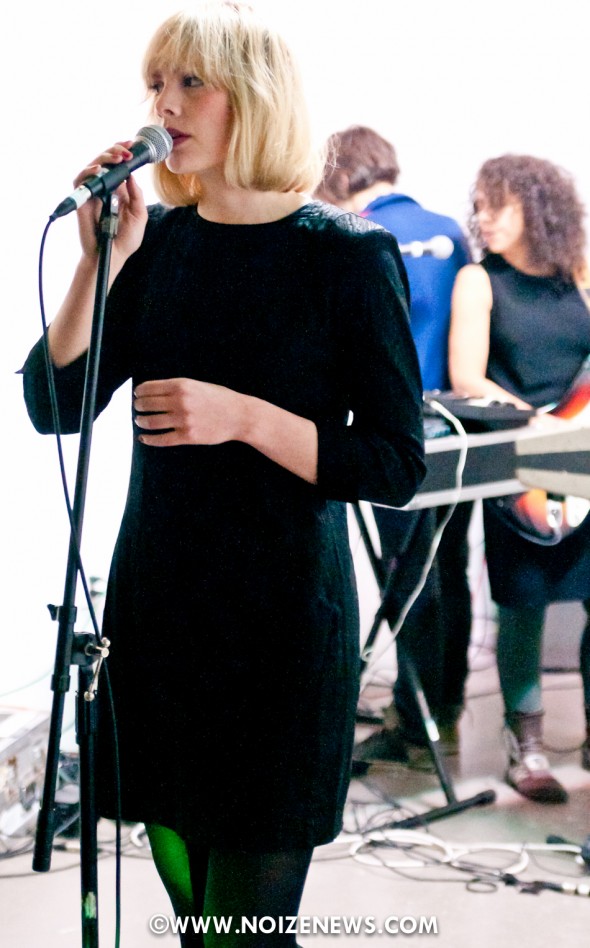 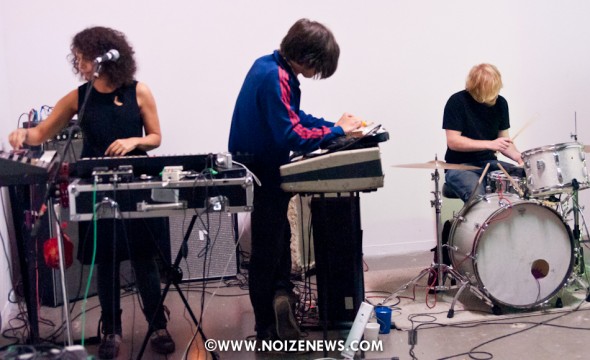 SLOWDANCE
Slowdance out of Brooklyn, NY is made up of :
Kyle…………..Guitar
Luke…………..Synth
Quay…………Vocals
Quigley………..Bass
Sam………….Drums
They describe themselves as a pop group and Stereogum describes them as a “Band to Watch.” Detroit was lucky enough to host a band whose “buzz” is being heard all over the place. Now that Slowdance has the opportunity to spread their music across the nation as they tour with Anika, it’s for certain that they have a lot of big things in store for them. 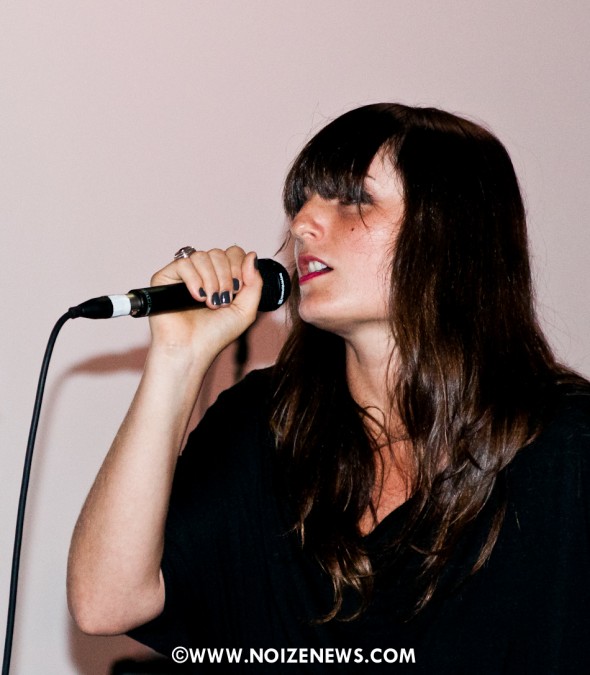 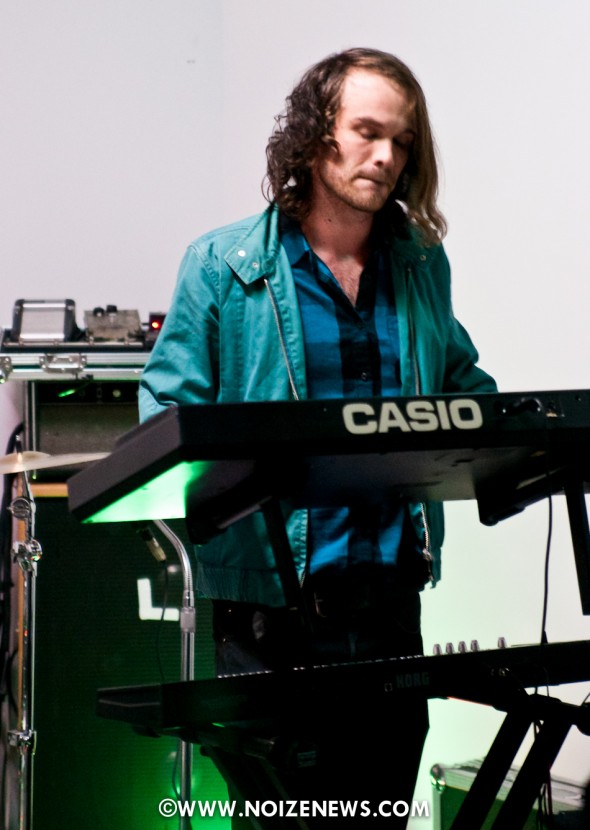 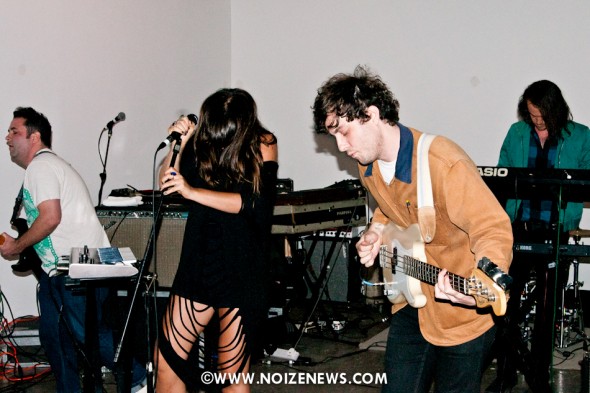 TURN TO CRIME
Turn to Crime is a local Detroit musician with a garage pop sound and a likable presence. 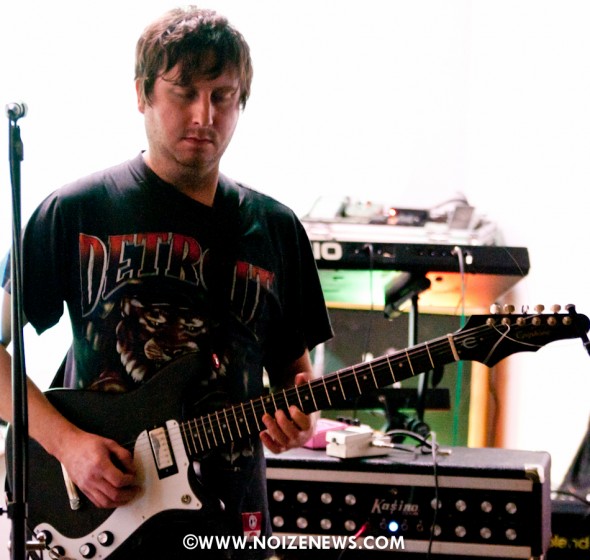 PAUL BANCELL
Paul is also a local Detroiter who performs as a solo artist and in the band The Baptist Church. He uses his guitar, synthesizers, and vocals to come up with a creative sound that all comes together in a satisfying way. 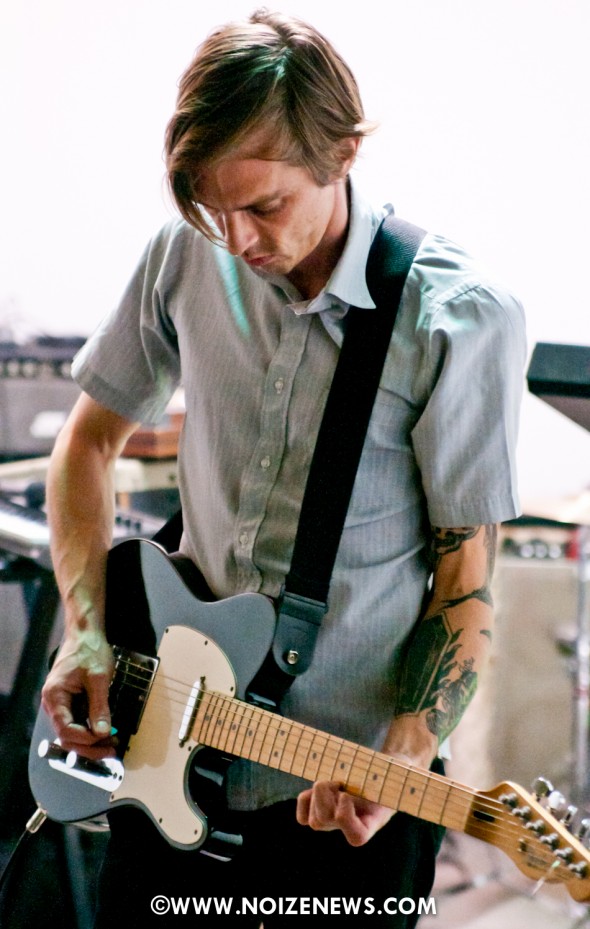 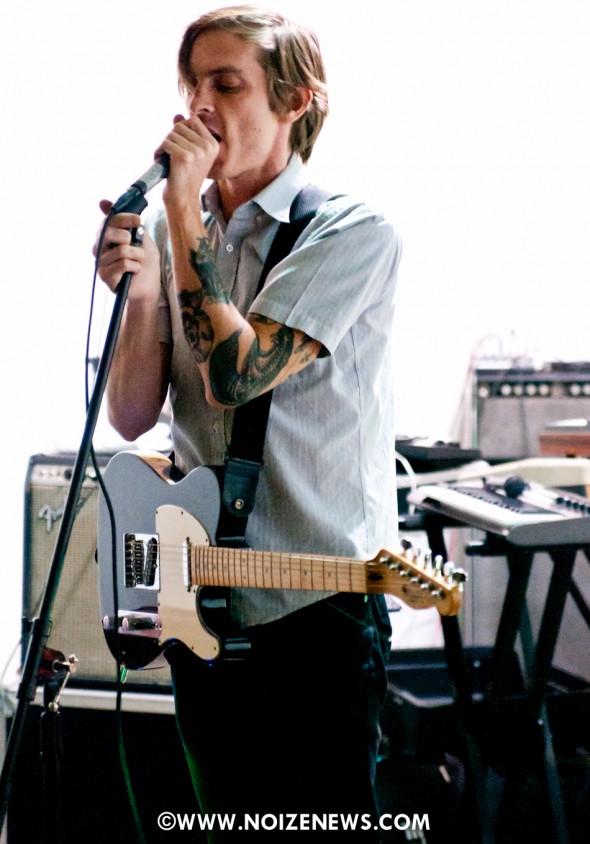 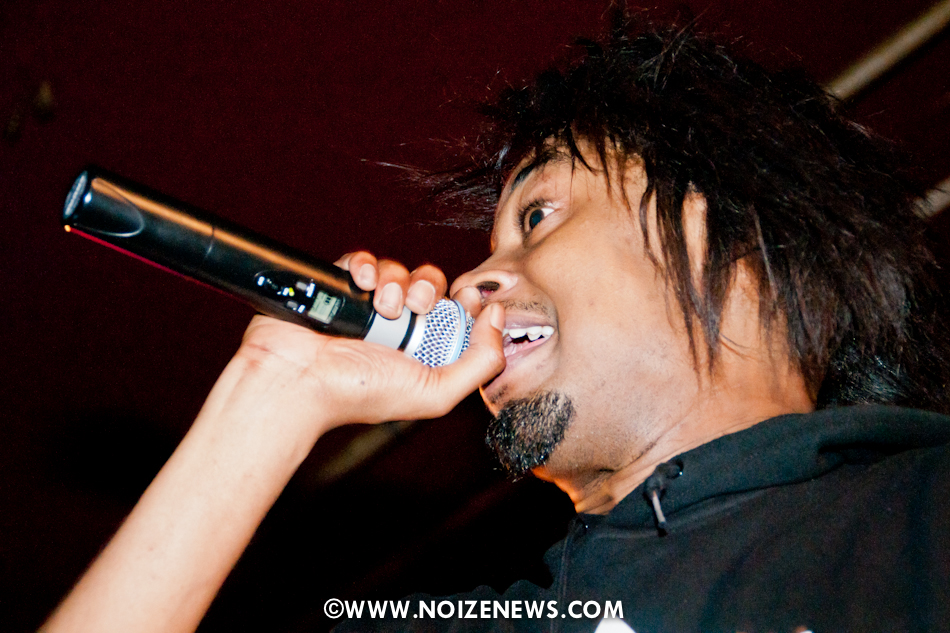 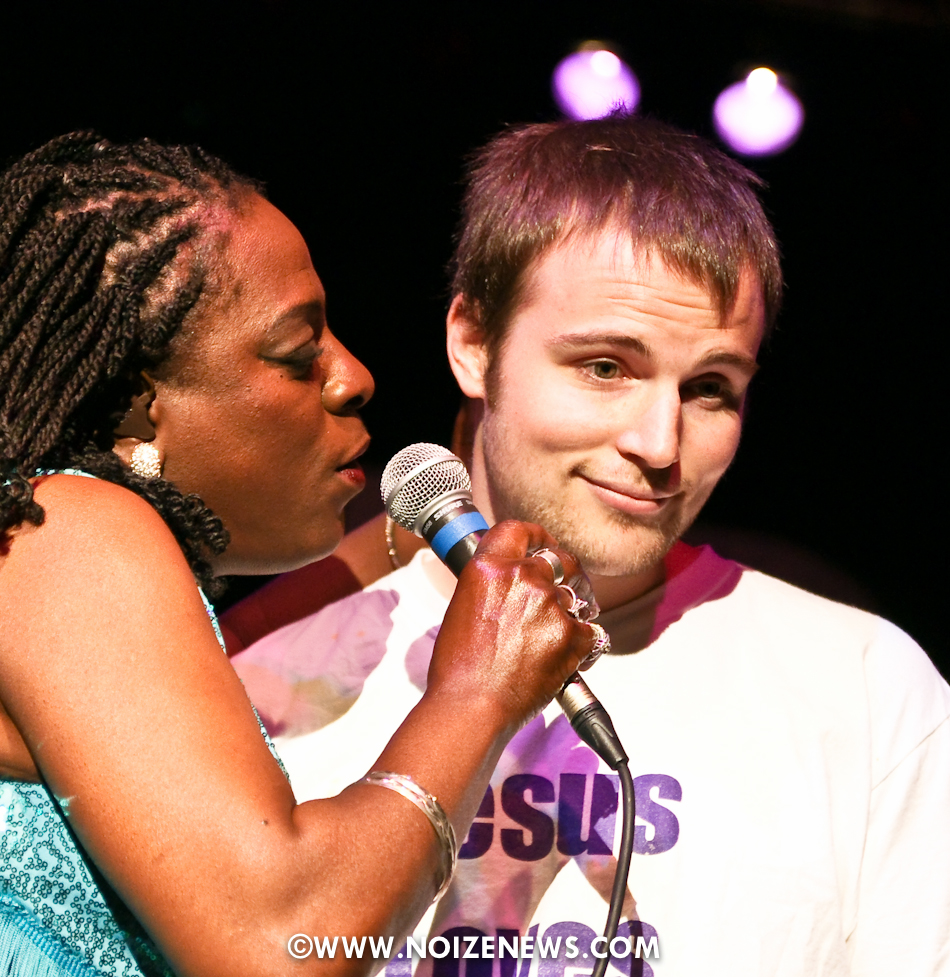