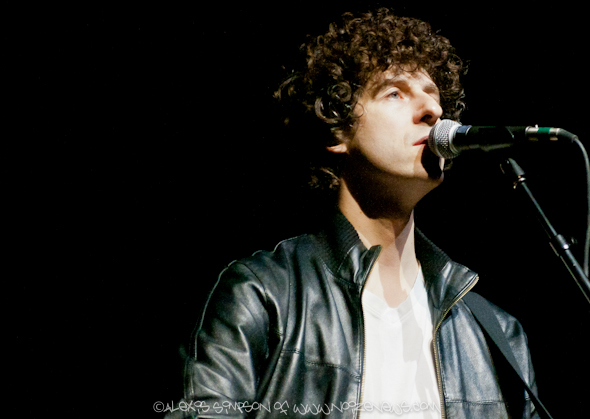 We saw the singer of Only Son this month (see photos below) when he opened for Regina Spektor. His performance was very enjoyable so we wanted to share his Facebook Bio and invite you to learn more about the band!

Only Son is the music of NYC-based songwriter Jack Dishel. His second full length record, “Searchlight”, will be released digitally and in indie stores across America and digitally on January 18th, 2011. The album features a duet written and sung with Regina Spektor and guest appearances by members of The Strokes, Of Montreal, and Little Joy.

In the years following the 2006 release of his de

but album, “The Drop To The Top”, Dishel toured all over the world opening for fellow NYC songwriters Regina Spektor and Adam Green, sang on their albums and also lent his voice to records by Kimya Dawson and Nickel Eye. In addition, he sang and played guitar as a touring member of Little Joy.

Before creating Only Son, Dishel fronted NYC cult favorite Stipplicon and was lead guitarist for The Moldy Peaches.

“Only Son reminds me of an amazing place I’ve never been to.” – Nikolai Fraiture of The Strokes

“The young American is a future headliner without a doubt.” –BBC Birmingham

“Features spare poetry that would have made a late 1960s John Lennon proud.” – HybridMagazine.com

“Funny and charming and talented enough to win us over.” –The Seattlest

“He possesses a turn of phrase that is quite extraordinary.” –Spitz (London, UK)

“Only Son has been praised far and wide for his dazzling lyrics and stage presence.” -Austinist