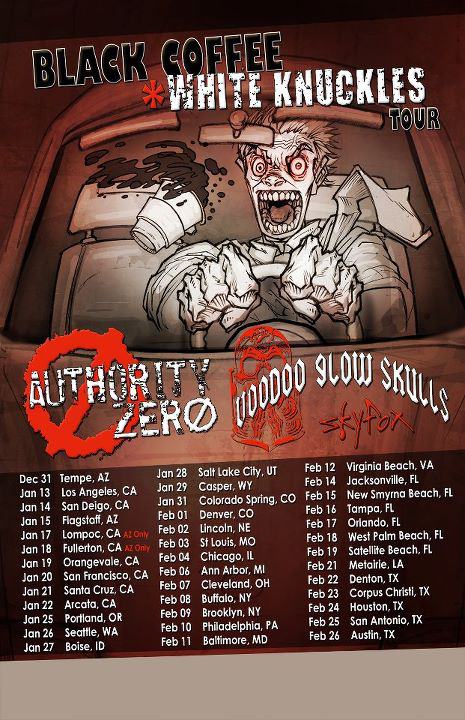 S.N.A.F.U., out of Ypsilanti, was a good opener to liven up a Monday night. They’re a hardcore–thrash-metal band who play powerful beats and melodies that make it sound like the end of the world is near. Their primal energy was infectious and easily got the crowd to jostle about and participate in circle pits. S.N.A.F.U. was on par with one another, playing as a brute force with a strong bass, thrashing guitar, screaming vocals and battering drums. Their set included songs, “Graves” (menacing, heavy tunes) and “W.D.G.A.F.” (fast and dark with plenty of attitude). Towards the end of their playing they said, “Thank you all for coming out early… f***ing Skyfox, Authority Zero, Voodoo f***ing Glow Skulls… Bad***.”

Skyfox are a pop-punk band from Denver, Colorado. They played their instruments well, producing upbeat music. They gave it their all and played songs like, “Runaway” (about taking your best friend to rehab), and “Twilight” (a song for the ladies). Their best song was “Church,” a lyrically witty piece that lead singer and guitarist Johnny Hill wrote, based off of his own negative experiences with religion and Christan schooling. Through it all they were good-natured and humorous which Hill proved again and again, “Would you guys rather be moshing to Authority Zero? F*** yeah! But I have an alternative. This is the best music in the world… to masturbate [to]. $5 [for a CD] will last you a life time.”

Authority Zero was an intense speed machine of punk rock and reggae elements. Hailing from Mesa, AZ, this band has been around since 1994 and they keep making solid music. Lead singer Jason DeVore constantly stood on the edge of the stage like he was commanding troops through his singing, and consistently involved the crowd. They started out with, “A Passage in Time” (similar to if Bad Religion was on speed and took on a harder and faster pace with deep beats and some reggae elements), “Revolution” (gruff singing, a slicing guitar and pounding drums) and “One More Minute (kind of like a sea ballad with a steady bass line, a guitar with drive and the drums as a powerful accent). Authority Zero could have played for the rest of the night; they were that addicting to listen to.

Voodoo Glow Skulls was highly anticipated. Their hardcore ska-punk music was like listening to a carnival on speed: including fervorish horns, fury of drums, a vigorous walking bass, a striking guitar, and a gritty voice to put people in a dancing frenzy. On tour from Riverside, CA promoting their new album “Break the Spell,” this was the first time that Voodoo Glow Skulls played at the Blind Pig. They played “Lucky B*stard,” (prominent bass, grinding guitar, and crisp horns) and covered The Coasters’ “Charlie Brown” (a hardcore ska speed waltz with forceful drums). They also covered “I Wan’na Be Like You (The Monkey Song)” from “The Jungle Book” (a faster spin with piercing horns and rough singing) and from their newest album played, “Police Knocking On My Door” (hard beats and quick pace with a hopping bass line). Voodoo Glow Skulls appropriately ended their set with, “Say Goodnight,” before playing a two song encore. Their new and older music sounded great. It was quite a night!