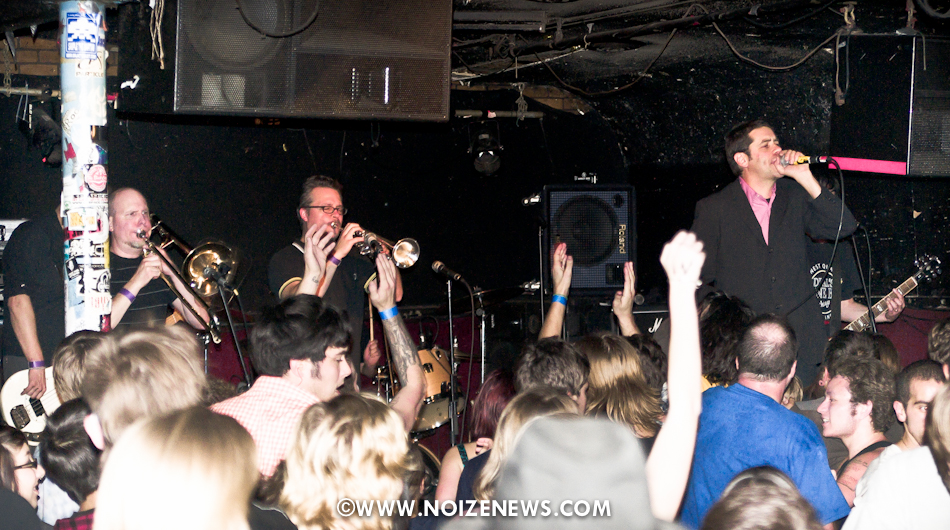 Review by Mitch
Photos by Alexis

If you weren’t at The Blind Pig this past Saturday, the 15th, you missed out. It was a show filled with Ska, Soul, Reggae and Punk music seamlessly transitioning through out the night. Headlining was Mustard Plug, celebrating their 20th year together.

It was a first for me (and many others) seeing Wisconsin’s Something to Do, and I for one was impressed by them. Their arrangement of music made me think of fast quirky waltzes and had a Mighty Mighty Bosstones feel with their announcing horns and strong bass—but without the gruffness of Dicky Barnett. Their guitarist, Kenny Dinkis is actually from Michigan’s own Hamtramck and excitedly told the crowd how he’d “wanted to play at Blind Pig since 1998.” These guys are super nice too. I had the pleasure of meeting their other guitarist and trombonist, Alex Kayser and Marc Kuntz, both down to earth and dedicated Ska musicians. Kayser wrote up their set list which included songs like, “(Reflections on) Chuck Norris,” “Red Stripe” (is it me or do most Ska bands have a song about alcohol?) and a worthy Billy Idol cover of “Rebel Yell.” They sped it up, took out the sounds that make it an 80s song, added fantastic horns and had Kuntz sing it. Ropin Rodeo Nate, at the start of their last song “Wannabe” said, “When we jump, you jump.” And with good reason. This creative, original Ska music was meshed with Run DMC’s “Tricky” which transitioned into The Sugarhill Gang’s “Rapper’s Delight” and then back to Ska. It was unexpected and lots of fun. This certainly helped to amp up the atmosphere for a rather lulled crowd (in the beginning) with the funky, ska beats. And although this song is available on I-Tunes, this version of it is saved for live shows only.

Locals, Gunday Monday are always fun and at their best playing live. You don’t get that level of intense, upbeat energy on CD like you do when they play a show. You also don’t get to see the Blue Dragon (similar to an angry version of Yoshi) join the crowd during “Dragonslayer,” a song with metal elements and heavy horns to cause mayhem and mosh pits. Alex Lee is in constant motion with a voice similar to David McWane’s of Big D and the Kids Table, but with more shrieking. It’s like listening to a musical battle or a live adventure complete with horns out of a video game, dancing rhythms and an animated singer. They played their lively song, “Machete Party,” a song that started out like a pleasant conversation and evolved to almost sinister sounding horns that demanded you to dance. They finished with “Eye for an Eye,” the entire band jumping up as one during some of the final notes, like a satisfying conclusion.

Toots and the Maytals have a song called “Reggae Got Soul” and when The Pinstripes started playing, to me that was an excellent description of their music. A Reggae, Ska, Soul influenced band from Ohio, Toots could have been singing about these guys (you know, had they been formed back in the 70s) when they said, “This reggae got soul…so much soul.” They’re the kind of band that makes you “want to sing and dance and do all kinds of crazy things.” Their music is smooth. It’s cool and collected. I feel like anything that I write about this band won’t do them justice and honestly, you just have to go see and experience them for yourself. And I don’t think I’m overselling them. Simply put, if you like old school Reggae, Soul, Two-Tone, enjoy early R&B and Motown… you should like The Pinstripes. They have horns with velvety tones, warm guitar offbeats, a driving bass and a singer who croons like a young Vic Ruggiero without the accent. They’re a young band with an old soul. Professional without losing edge. If you have the opportunity, go see them—you won’t be disappointed.

Green Room Rockers unfortunately played a short four song set which included ” Conqueror”—a song with a keyboard that oozes Rocksteady (slow, Gospel influenced Ska) melodies backed by jaunty guitar, a deep bass and accenting drums. Lead singer Mark Cooper asked the crowd at one point, “Can you feel that soul?” Which the band certainly did. Obi Fernandez joined them after their last song for his set with trombonist Leonardo Murcia and lead singer/saxophonist Mike Sarason from The Pinstripes. The mix played a solid, fervor set, covering songs from Westbound Train like “I Feel Fine,” “Check Your Time ” and one of the first songs that got me into Ska and Reggae in general, “Please Forgive Me.” If you had to compare Fernandez’s voice to someone, a suitable artist would be John Mayer. Except that Fernandez completely gives himself to the music. He plays with his heart and his soul. I had a chance to speak with him after the show at BTB (if you go to a show at The Blind Pig, or play one there, the next thing to do is to grab a burrito) and he’s a really down to earth guy. He’s very mellow, and truly believes in playing his best at every show no matter what because sometimes when you’re down; hearing sincere music makes all the difference. Fernandez also covered Marvin Gaye’s, “Stubborn Kind of Fellow,” a personal favorite of his. Towards the end of the set, if not the end, he said, “If you had a good time make some noise”—and with the thunder that came after, it was apparent that the crowd did.

After twenty years of being together, Mustard Plug still has it. “This is a really solid night of music,” Dave Kirchgessner told the crowd. You can tell that they’re well established and used to playing with one another. And it isn’t just a job for them. It’s more like another day to play fun, uplifting music that makes people move and smile. A highlight of their set was during their song “Real Rat Bastard” when Gunday Monday’s Blue Dragon crowd surfed and its tail was pulled off. Kirchgessner at first put the tail on his hand, commentating that it looked like he had a tentacle. It was then placed on his head and he took on the appearance of that blue alien opera singer from “The Fifth Element.”  Mustard Plug played favorites like, “Lolita,” “Brain on Ska” and my personal favorite, “Life Is Too Short.” A song that tells you that time is too precious to get angry over nothing and to not let that control your decisions. Set that meaning to a catchy melody, with horns that can actually play Ska, some good drumming and you’ve got a bona fide third wave hit.  With the different genres blending throughout the night, Gunday Monday’s trombonist Bud Koltys summarized it well referencing Chris Murray’s simplistic lyrics, “Give me that sound from back in the day, give it to me, we want the real Ska.”

Half of Something to Do 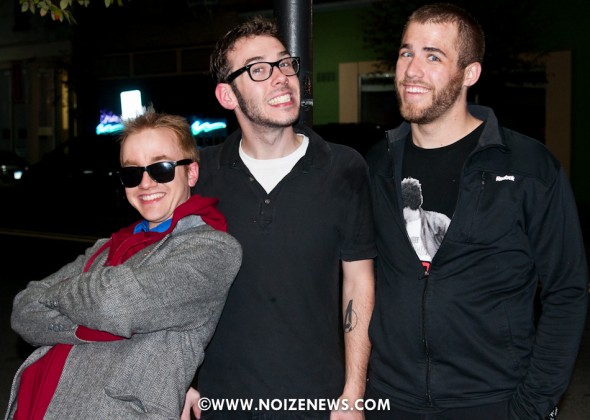 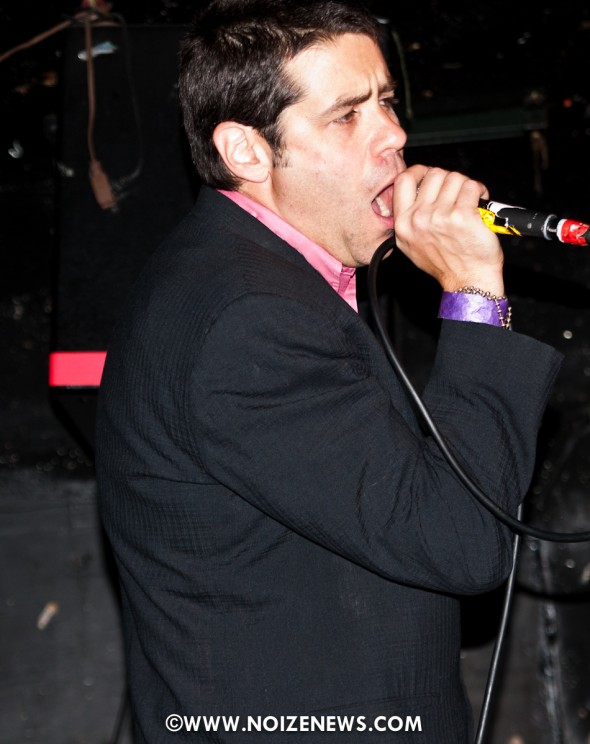 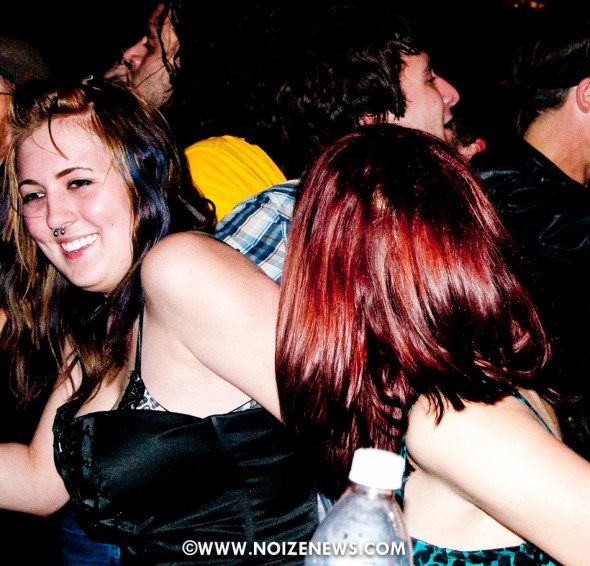 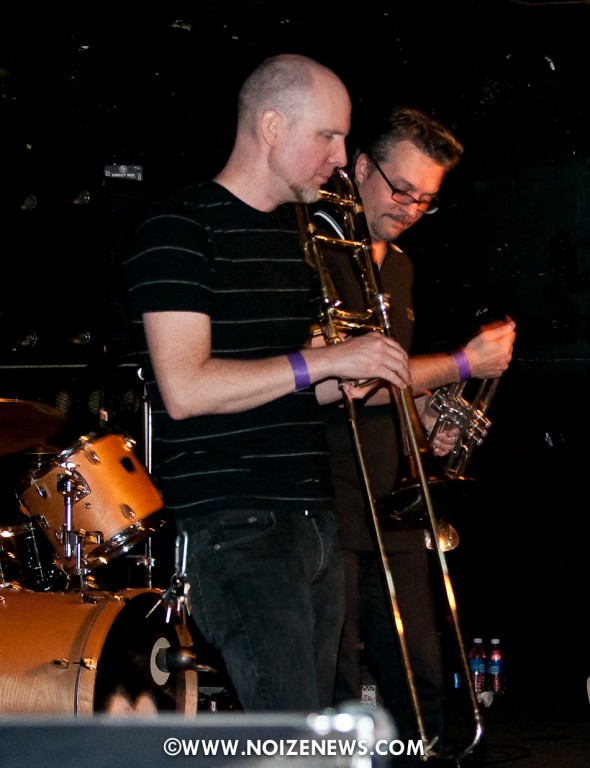 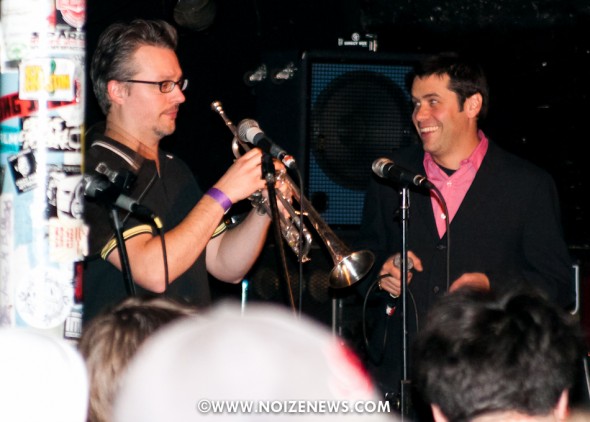 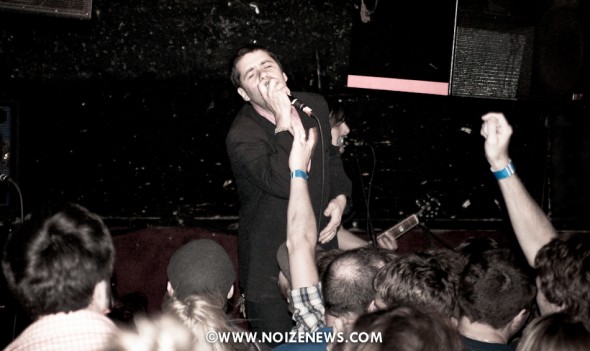 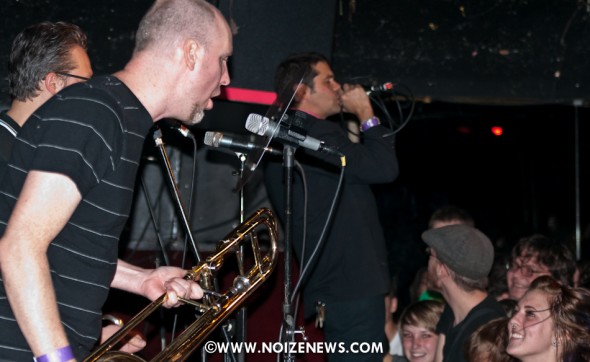 A Pretty Girl, a Chihuahua, and a Taxi! 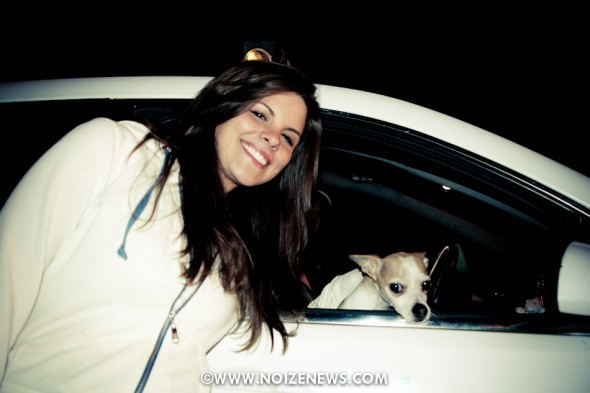 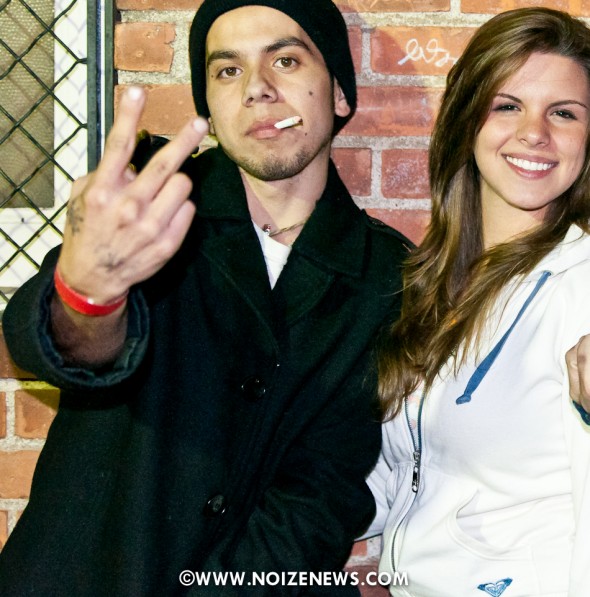 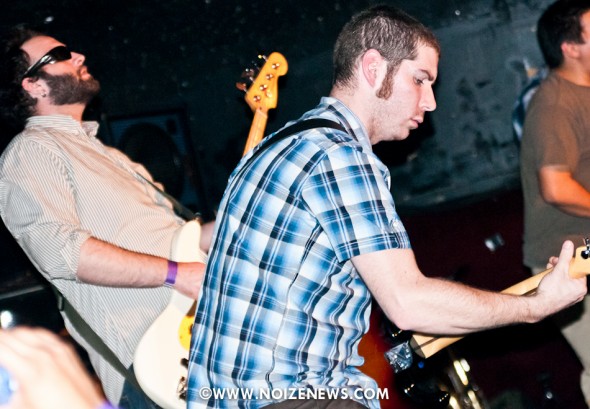 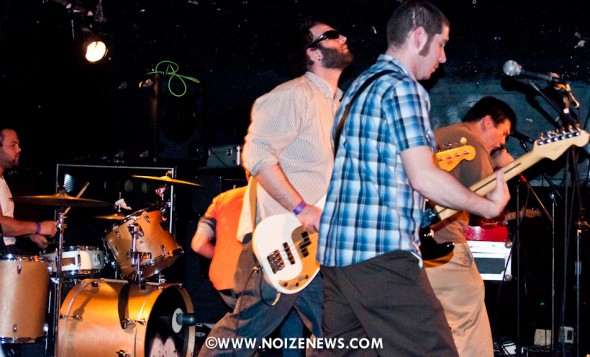 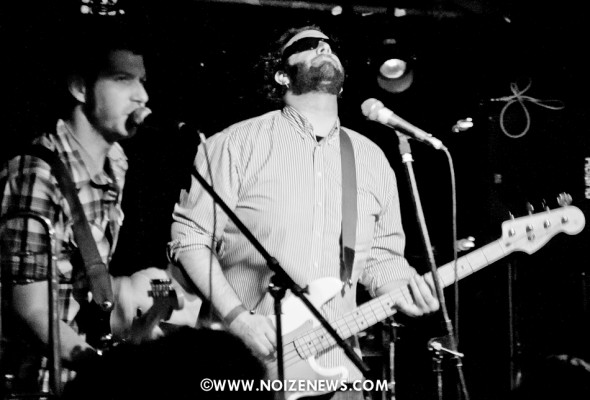 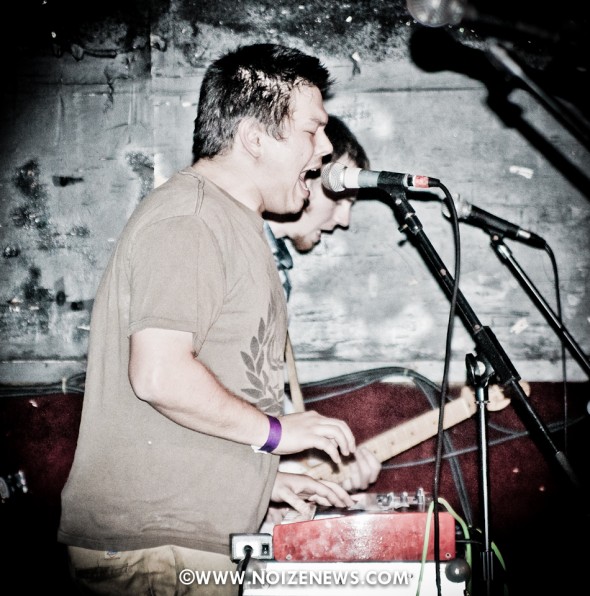 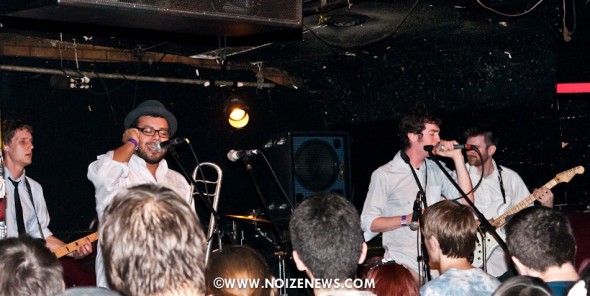 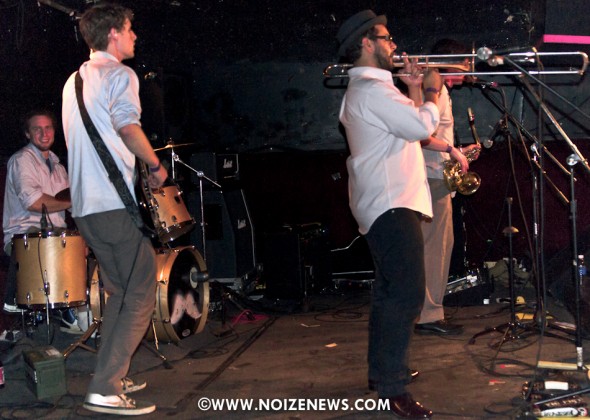