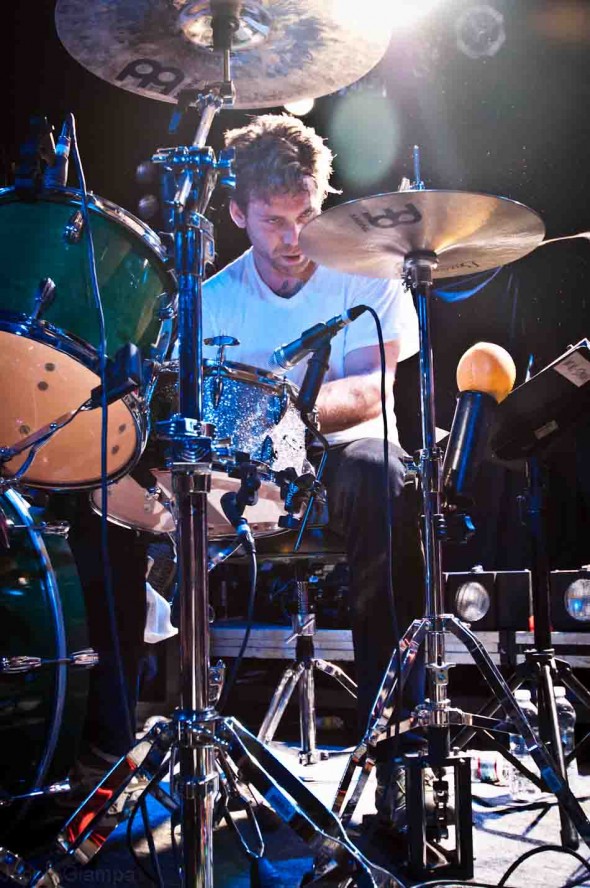 We got the opportunity to ask Allen Blickle of Baroness a few questions in preparation for their new album Yellow & Green to be released July 17.

Noize: Baroness recently played an impressive show in Detroit with Meshuggah and Decapitated…What did you think about the experience? Do you have any fond memories ofthe Detroit area or audience? (View Jacob Giampa’s review and photos from the show HERE.)

AB: I remember that show having the smallest most cramped stage of the tour. My drum set had to be pushed all the way up to the front of the stage. I think I had a beer can thrown at me at some point. I felt like I was playing a basement show in front of 2k people. That was memorable. Oh yeah,I had a sip of Faygo at some point that day.

Noize: Ha! What do you love about touring?

AB: Being away from home….

Noize: What do you dislike about touring?

AB: Being away from home….

Noize: The band is about to kick off a European tour. Are there any interesting differences between the audiences here vs. Europe or the touring experience in general?

AB: There are slight differences. Our European fan base has always been pretty strong, and people are very passionate about music there. I find it interesting that Europeans are more honest about performances. They will let you know forthright if you played well or not that evening.

Noize: Your upcoming album Yellow & Green has been described as less aggressive, more melodic and reflective of your growth as artists. We appreciate and respect the value Baroness places on making the kind of music you want to make, not what others think you should make. What is your current artistic vision?

AB: You can compare a number of our records and say that one is less aggressive or more melodic, that is not something new for our artistic vision. We wrote material that felt right and not forced, we have to be genuine with how we write music, and this is how it came out.

Noize: Yellow & Green is a dual album: Was there any particular way the tracks were divided up?

AB: We wrote more songs than we needed, took a step back and looked at everything as a whole. We knew we wanted a certain sound for each record, so we molded the records after the songs were written. But somehow when we were writing each song we knew where it would fit better.

Noize: How has your longevity in the music industry helped shape and create Yellow & Green?

AB: Bands that stay together longer are able to create better and better pieces of art. The more time you spend the more confidant you are about how to write music and how to show different sides of your musical pallet. We have been a band for the better part of a decade now and we have learned a great deal about how to write as a group and on our own.

Noize: What is your state of mind preceding and a few weeks into the release of a new album?

AB: We are so busy right now with tours, festivals, interviews, practices, and everything else that goes along with a new album that sometimes I forget that the album isn’t even out yet. We are all very focused and working hard right now so there is good energy within the group and about the release.

Noize: Your past albums have received a deluge of positive reviews from respected sources like Pitchfork. Do you pay attention to reviews?

AB: I read Pitchfork pretty often anyway so it’s cool for me to see our albums reviewed. I find it interesting to see what aspects publications like this find good or bad. You just don’t want to get sucked up into the hype, be it positive or negative.

Noize: Can you give us any insight into the album artwork? What medium did John use on the original piece?

AB: John will start with pencil and then pen and ink. It’s really exciting to see the process and to watch the picture come to life. He will always throw in some content that is relevant to our lives at that time.

Noize: What else do you have planned for the rest of 2012?

AB: Many festivals this summer and into the fall, then we are planning a tour in North America sometime in the fall as well.

Noize: Thank you very much!