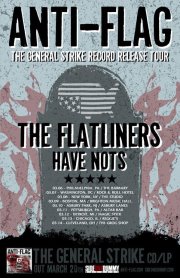 We arrived at the The General Strike Release Tour just in time to feel the floor of the Magic Stick vibrating from Wilson’s last song. Their rock ‘n roll sound was filled with strong metal elements backed by enthusiastic, shredding vocals. Wilson was an ideal local group to start off the night which was evidenced by an enthusiastic mosh pit.

Wilson
Have Nots
The Flatliners
Anti-Flag

It was good to see Boston’s Have Nots play Magic Stick again–the last time was in September 2011. This band has substance and seeing them play live is a must. Their take on ska punk is filled with honest, intelligent and satirical lyrics, backed by speed, grit and energy that will leave you in the dust. Bassist Jameson Hollis was unfortunately unable to play this tour and Have Nots were instead joined by Nick Scotti, who did a fine job and kept up with the overall sound. Their set included, “Frozen Heart,” “Anywhere But Here” and “Poison Antidote.” Have Nots play with the intent of the crowd having a sound time and consistently engaged them, “Detroit you’re f*cking awesome”—likewise, Have Nots. Likewise.

The Flatliners were a blast of ska punk and filled the room with intense energy. Hailing from Ontario, these guys have been around since 2002 and have a loyal following. The Flatliners were a zealous rapidly paced machine spitting out raspy lyrics faster than you can think, with a pounding force of mechanical drums, backbone bass and chugging guitars. They played songs like, “Euology,” “Fred’s Got Slacks,” and “Count Your Bruises.” Down to earth and humorous, The Flatliners were appreciative, “Thank you guys for showing us a lot of love” and shared with the crowd that Michigan was “…the first place in the U.S. that felt like home.”

On tour for their latest album to be released March 20th, “The General Strike,” Anti-Flag were highly anticipated. Fans flocked to the stage to raise their fists and voices to songs like, “F*ck Police Brutality,” “A New King of Army,” and “Drink, Drank, Punk.” Anti-Flag’s music was tight: a whirlwind of hard beats, fast-paced thrashing guitars with a guiding bass led by a voice comparable to A.F.I. Their lyrics are fiercely spirited, strongly opinionated, a little preachy but blunt. They are a voice for the people and a call for action against those who choose to wrong humanity. Anti-Flag were also very personable from paying constant homage to Detroit throughout the set, promoting awareness for a cause or just talking to the crowd and telling bad jokes. Anti-Flag are a hit or miss type of band, but for this show, it was abundantly clear that they were far from being a miss.