History is known to repeat itself. Though sometimes the circumstances are different, our most familiar fights have a way of resurfacing. According to ThinkProgress.org, Rosanell Eaton is facing a historical battle that she probably thought that she would never have to fight again.

At the age of 21, Ms. Eaton experienced literacy tests in the segregated North Carolina. The test involved reciting the preamble to the Constitution, which she managed to do and was awarded with enfranchisement. (By the way, isn’t just ballsy to use the Constitution in an attempt to deny someone their right to vote as guaranteed by the Constitution?)

Thanks largely to the Supreme Court striking down Sections 4 and 5 of the Voting Rights Act of 1965,  North Carolina among several other states is clamoring to be first across the line in the race toward voter restriction. Unfortunately, Ms. Eaton is again forced to step into the ring to fight against voter suppression .

According to the article, “… she may not qualify for the voter ID card required under the new law, because the name on her birth certificate is different from the name on her driver’s license and voter registration card. Reconciling this difference will be a costly and time-consuming administrative endeavor.” (Why a driver’s license is not considered to be an acceptable form of identification to vote is mysterious.)

Considering that she was born in 1921, most likely delivered by a midwife outside a hospital, tracking down her original birth certificate will be a mean feat indeed. Then, it’s a matter of figuring out which identification needs to be changed, which no doubt requires a fee of some kind and could even mean that she would have to visit her local Department of Motor Vehicles to make the change.

Not surprisingly, Ms. Eaton is joining several other individuals and civil rights groups in suing the State of North Carolina over their new restrictive law, which also contains provisions that eliminate same-day registration, early registration for high schoolers in advance of their 18th birthday, and prohibits certain kinds of voter registration drives that tend to register low-income and minority voters.

Also not surprisingly, the legislature and the governor’s office are both controlled by Republicans who seem hell bent on preventing anyone who doesn’t vote Republican from voting at all.

Since the Department of Justice can no longer require preclearance for changes to voting laws, it will be incumbent for voters to incur some nature of harm under these laws, sue as a result of this harm, and be able to prove in civil court that they were in fact harmed by the laws. Since it is mostly poor people and minorities who will be affected by these laws, one can only hope that civil liberties organizations will be able to pick up the slack.

The other possibility is to count on Congress to act and reinstate the struck down portions of the Voting Rights Act of 1965. Since the prospect of Congress acting to do anything is as mythical as unicorns, it seems that lawsuits under other provisions of the Act may be the way to go.

Any time you are required to spend ANY amount of money in order to vote (case in point, being forced to pay for a voter identification that apparently is completely separate from your driver’s license), that amounts to a poll tax, which is unconstitutional according to the 24th Amendment. You don’t even need the Voting Rights Act of 1965 to prevent fees for voting.

Despite the fact that the Supreme Court is equally likely to use copies of the Constitution for toilet paper as it is to use them to uphold the ideals of a democratic government, the fight must press on. North Carolina’s law must be challenged as an attempt to impose a poll tax and seen by judges along the way for what it is; a discriminatory law that is designed to prevent the poor, the elderly, students, and anyone else who might even be remotely likely to vote for a Democrat.

If we are able to prove to the Supreme Court that the poor, the students and the elderly are minorities that run cross-culturally, and that North Carolina’s law is reminiscent of tricks imposed by Hitler and Stalin to eliminate their political competitors and ensure their continued power, we might just get somewhere. 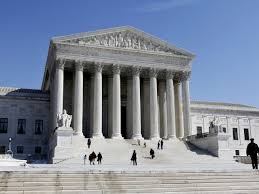 During this past week, the Supreme Court issued a flurry of decisions, culminating in two of the most highly anticipated decisions of the Court’s last session: The case surrounding the Defense of Marriage Act tried in conjunction with the constitutionality of California’s Proposition 8, and the necessity of Section 4 and 5 of the Voting Rights Act of 1965, which required states with a history of discriminating against voters because of their skin color to get permission from the Department of Justice to change voting laws.

This is a step in the right direction to be sure. Unfortunately, the decision still allows the nation to be a patchwork of marriage regulations. Legally married same-sex couples still have to worry about their valid marriage becoming invalid in another state. But, they do get the dignity of recognition and the ability to collect federal spousal benefits.

While the Court finds that same-sex couples deserve to be treated equally, it kept on it’s zig-zag path of both advancing and restricting rights by eviscerating the Voting Rights Act of 1965 by striking down Section 4 and Section 5 of the Act, declaring “Blatantly discriminatory evasions [of minority voting rights] are rare,” according to Nation of Change.

Apparently, the Supreme Court was on a different planet when GOP Secretary of State of Florida Ken Detzner tried to purge 180,000 Americans, mostly Hispanic Democrats, from the voter rolls. They definitely didn’t notice the 6 hour lines in the mostly African-American populated districts on Election Day in Florida.

What makes this decision even more puzzling is the fact that just last week, the Supreme Court ruled that Arizona’s law requiring the showing of citizenship papers was an unconstitutional attack on Hispanic voters, according to the Nation of Change article cited above. Arizona is one of the 16 states covered by Section 4 of the Voting Rights Act of 1965.

WTF, Supreme Court? In one moment, the majority falls in favor of equal rights for all couples in collecting federal benefits, but in the next moves to allow states to gerrymander districts in a blatantly discriminatory fashion, impose restrictive identification laws, and move polling places with little or no prior notification to potential voters.

But don’t take my word for it. ThinkProgress.org reported that just about two hours after the Court released its Voting Rights Act decision, Texas  Attorney General Greg Abbott released a statement that the state will immediately implement a voter-id law and a redistricting plan that were blocked by the Department of Justice as patently discriminatory under Section 5 of the Voting Rights Act of 1965. “Federal courts agreed that both the strict voter ID law and the redistricting map would disproportionately target the state’s fast-growing minority communities,” ThinkProgress reported.

The voter-id law in question accepts expired gun licenses from other states, but states that Social Security cards and student id’s are not valid forms of identification. Those who lack the proper proof of identity must travel at their own expense (sometimes several hundred miles), present a birth certificate (which not all senior citizens can easily get a hold of considering the long form copy is filed at the clerk’s office in the county of their birth) and pay a fee (which amounts to a poll tax) to get a voter id.

As far as the redistricting plan goes, “… a panel of federal judges found that ‘substantial surgery‘was done to predominantly black districts, cutting off representatives’ offices from their strongest fundraising bases.” Meanwhile, the red lines were gladly shifted for white Representatives to include certain posh country clubs, and “in one case, the school belonging to the incumbent’s grandchildren.”

Kudos to the Supreme Court for recognizing that all couples in this country should have the same fundamental rights to collect federal benefits. It’s just a shame that they don’t believe that all people in this country should be enfranchised and therefore empowered within our democracy. Voting is a fundamental right of the United States citizenry, clearly implied in the Article I and II of the Constitution and guaranteed by the 15th, 19th, and 26th Amendments. The fact that the majority of Supreme Court justices ignore the Constitution when ruling on constitutional issues should be a case for impeachment.