According to an article in the New York Times, Senate Republicans are attempting to filibuster debate of the so-called “Buffet Rule.” The Senate fell nine votes short of the 60 necessary to stop the filibuster.

The Buffet Rule was hatched as a way to make the tax code more based on billionaire Warren Buffet’s lament that he gets taxed at a lower effective rate than his secretary. He believes, as many Senate Democrats do, that millionaires and billionaires should have to pay 30% of their income in taxes, whether it be on capital gains or on their generous salaries.

Republicans are having a hard time stomaching this because it is their belief that no one’s taxes should be raised in this time of economic turbulence. They are continuing to refuse to raise taxes on “job creators.” To top it all off, Senate Republicans are accusing the Democrats of wishing to raise taxes to fuel their own governmental spending desires.

House  Republicans will vote on a bill to cut taxes for businesses with less than 500 employees by 20 percent, which will cost the Treasury $46 billion; $1 billion less than the amount of money passing the Buffet Rule into law would raise. However, extending Bush era tax cuts is expected to cost the treasury another $160 billion over the next ten years.

If any of these Republicans were in my Economics or Government classes, they most certainly would fail the final exam.

Not everyone who makes over $1 million per year has created a business. Some are simply investors or speculators who made a few right calls and now enjoy a large capital gains income, taxed at a measly 15%.

Those who have created a business will not see tax cuts as an incentive to put up the help wanted signs. Most likely they will pocket the extra cash and perhaps invest more money in finding ways to make production more efficient (i.e. do the same amount of work with less workers).

The only thing that will cause business owners to want to hire more people is if there is a greater demand for whatever it is they are selling. If they cannot produce enough to meet public demand, they will hire more people to meet the demand lest the competition do so and force them out of business. (Economics 101)

The best and most effective way to increase the demand for products is to put money into the hands of those who wish to spend it (the 99%). There is no way that the spending habits of the 1% could ever equal the spending power of the 99% in any economy.

I have already suggested a reboot of the Works Progress Administration which would offer jobs to people fixing our roads, repaing city water pipes, electric grids, and the rest of our crumbling infrastructure. The money for this could come from slashing the military budget by 10%. Yes, our veterans would certainly be eligible to take these new WPA jobs if they were created.

Yet, instead of offering practical, long-term solutions as the Democrats have, Senate Republicans instead choose to stall the legislative progress on a bill that might also be used to fund a WPA reboot, or pay off some of our $15 trillion debt. They won’t even entertain the idea of allowing Bush-era tax cuts to expire, despite the additional revenue that could be experienced for the government.

This is where Senate Republicans also fail the Government final exam. Nowhere in the Constitution is there even a hint of a provision for a filibuster. Even if it could be justified by the Necessary and Proper Clause, the Constitution provides that a simple majority in Senate should be considered sufficient to carry out any legislative process, including breaking a filibuster.

However, it is obviouos that none of our current representatives, Democrats and Republicans alike, have read the Constitution recently or are even remotely familiar with how it is to be applied to the operation of our Federal Government.

Instead of trying to block debate, Senate Republicans should be open to debate. They should be willing to hear the arguments of the opposing side, and present arguments of their own to the contrary. Then, both sides should try and hammer out a compromise that is agreeable t0 both sides.

At the very least, Senate Republicans should acknowledge that continually cutting taxes will not create jobs, only more wealth for the 1%. They should realize that government must be paid for, and is paid for through taxes. There are only so many government programs that can be cut before the government ceases to exist. 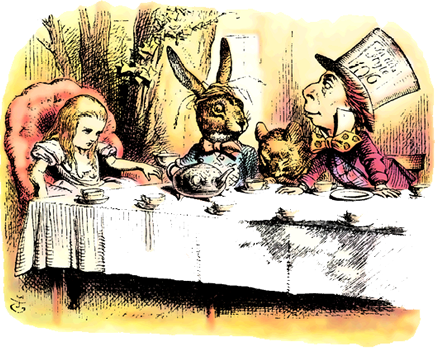 There is some confusion in this country regarding what the Tea Party really stands for. This political party started as a grassroots effort that was largely ridiculed for their stance on political policy. However, it has gathered a head of steam and now is headed down the rails toward the 2012 Presidential candidacy.

Somehow this party got associated with the 1773 Boston Tea Party. This erroneous conclusion is one that is easy to draw. Members of the party claim that they are “Taxed Enough Already” despite the fact that many of its members are some of most affluent members of our nation.

The Boston Tea Party was a reaction to Great Britain’s attempt to conceal a three pence tax on tea from the colonists by appointing consignees to purchase tea from the East India Company and sell it in the colonies. The idea was to have the duty paid in London before the tea landed, or have the consignees quietly pay the tax once the tea sold. The tax was used to pay colonial officials, and the attempt to conceal the tax fooled no one. This caused dozens of colonists to dump an entire shipment of British tea into Boston Harbor in protest.

Based on the latest actions of our Tea Party, it has become obvious that they would like to dump the entire way of American life into Boston Harbor rather than pay their fair share of taxes.

Tea Party activists stubbornly refused to approve any debt-abatement plan that involved raising a single tax during our latest debt ceiling fiasco. Despite them lauding their version of compromise in an 11th hour agreement, Standard and Poor’s still downgraded the credit rating of the U.S.

Now, Rick Perry, Mitt Romney, and Michele Bachmann, all Tea Party activists, have found their way into the GOP’s front runners for the 2012 Presidential candidacy. Their debates have involved such crass actions as applauding over death penalty rates and cheering at the suggestion that a person with a life-threatening illness be “left to die” since he has no health insurance. Bachmann has even suggested that America eliminate its minimum wage. Her belief is that “we could effectively eliminate unemployment completely because we could offer jobs at whatever level.”

Apparently, Bachmann has suffered the ill effects of our nation’s declining educational system. She has forgotten the lessons of the Progressive Era, during which time people frequently worked 12-14 hours per day for as little as $0.15 an hour. Perhaps today’s society would never drop to that level, but it is very easy to imagine how quickly average income in this nation would plummet while hours worked would skyrocket.

Tea party activists also seek to make debilitating cuts to Social Security, Medicaid, Medicare, unemployment benefits, and educational budgets across the nation. Anything to not raise taxes, at least on the richest 1% of the country or any of the corporations (which Romney believes are “people”) who bankroll their campaigns.

Cutting these programs, which Tea party activists call “entitlement programs”, would reverse over 75 years of progress our country has made toward ensuring that every American can realize a decent standard of living. These programs were specifically designed to prevent seniors from living in destitution in their golden years, prevent unnecessary deaths by allowing underprivileged individuals to get health care, and provide those between jobs with a minimal way to provide for their families should they lose their jobs.

We don’t care about old people, poor people, or even the middle class.

We would rather hang on to all of our money and turn all of our governmentally regulated programs over to private entities.

We want to make sure that if you lose your job, get old, or get sick, you will be on your own unless you are one of us, the elite few.

This type of thinking is asinine, greedy, and just plain wrong. Governments need money to function. They pay bills to function, and prices for governments go up just like prices for the average consumer. Taking away their ability to pay those bills will ensure its failure much like taking away a person’s job would ensure they go without food, water and shelter.

The very fact that voters are even considering these selfish individuals to represent the interest of the nation is even more shocking than the beliefs the Tea Party embodies. I would implore voters nationwide to not be fooled by the rhetoric of these so-called politicians. Their only plan for the United States of America is to turn it into the Corporate States of America.

If you enjoy the prospect of living in the great state of Wal-Mart or Dow Chemicalville paying through the nose for garbage pick-up, police service, or firefighting, then by all means vote for these radical extremists. I would prefer to vote against these people in the next election and thereby prevent such an occurrance.