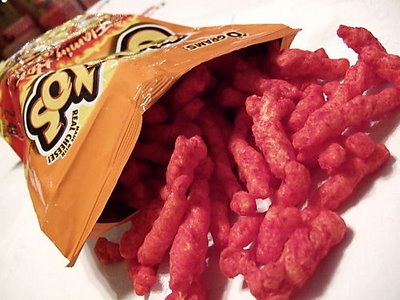 Flaming Hot Cheetos have become all the rage in schools across the country, so much so that schools are actually considering banning the food altogether.

Schools in California and New Mexico have already cited the snack’s unhealthy ingredient list as the main reason for the proposed ban. The Huffington Post reports that schools also dislike that students use bags of Flaming Hot Cheetos as a replacement lunch, that germs are spreading through sharing of Cheetos, and that janitors are forced to spend extra time scrubbing red fingerprints from everything fingers covered in Cheetos remnants have touched.

Out of all the problems facing education today, banning Flaming Hot Cheetos should score a priority level of 144 out of 145 possible improvements schools could make. Why banning a snack food has become priority number one for some schools is one of the great mysteries of the universe.

Banning snack foods at schools is nothing new. For a long time, high schools banned bringing screw-top bottles into school because of the potential of mixing alcohol into a partially emptied bottle. That came to a complete stop when Pepsi and Coke introduced vending machines for students.

Elementary schools have peanut-free classrooms to accommodate a single student with a peanut allergy. Teachers in those classrooms get the privilege of inspecting every lunch a student has brought from home for snacks or entrees containing peanuts. They also get to see the look on a student’s face as they throw away anything a parent packed in their lunch or snack that contains peanuts while telling them they have nothing to replace it with because of district pay cuts.

As far as I know, no one is allergic to Flaming Hot Cheetos quite yet, and there is no way any sort of alcohol could find its way into the bag. (Unless you want some soggy Cheetos.) So, we are back to the question of why schools want to ban them.

Blowing the lid off schools’ motives

Students have been bringing unhealthy food to school since unhealthy food was invented. Schools peddle snacks that are equally unhealthy to Flaming Hot Cheetos, and some actually contain less nutritional value. Therefore, the argument that they are unhealthy holds no merit when you compare them to Skittles.

Students using Flaming Hot Cheetos as an alternative to lunch raises my eyebrows a bit. However, the choice to have only Flaming Hot Cheetos for lunch is one that students make for themselves. They could just as easily pack carrots, a cold-cut sandwich, yogurt and pretzels as they could a tub of lard and half a bag of sugar. Additionally, enforcing the ban might deprive some students of their lunch altogether if they made the questionable choice to have snack foods for lunch. Therefore, to eliminate Flaming Hot Cheetos is to eliminate lunch room choices, no matter how bad they may be.

Janitors complaining about having to clean up greasy red fingerprints from everything students touched brings a measure of concern, as well. Then again, when I was in school, janitors had to clean up puke, blood, urine, feces, saliva and mucus in addition to their normal lunchroom cleaning duties. They had to clean greasy fingerprints off the auto shop doors, and sometimes whole hand prints from glass doors. Schools should be telling their janitors to suck it up or find another job rather than letting them play the martyr because of a reddish dye in a snack food.

No school’s argument for the banning of, well, anything would be complete without noting that students are somehow swapping germs. In this case, students share the snack, passing germs from mouth to bag and bag to mouth.

While this poses a legitimate health concern, so does students not washing their hands after using the restroom, kissing, holding hands, failing to cover their sneezes and coughs, and students coming to school sick. Until all these activities are regulated to minimize the chances of germ swap, the school’s argument is left with no legs to stand on.

Schools should be focusing on how to reform education to provide better core curriculum (math, science, social studies, and reading) rather than focusing on which snack foods to ban. They should be organizing band booster fundraisers, or other fundraisers to make sure that students can enjoy music, drama, and the arts along with the courses that are required for graduation, not organizing a snack food task force.

As it is, food bans at the junior high and high school are nearly impossible to enforce, and take time away from classroom instruction at the elementary level. Until the snack can legitimately be tied to lower school performance, interference with their educational mission, or a severe health issue like an allergy, banning Flaming Hot Cheetos is merely a nanny state tactic thinly masked by ridiculous assertions about its healthiness or cleanliness.