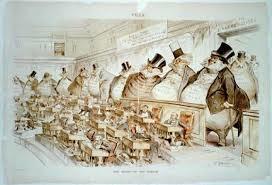 Forget July 4th as a national holiday. Mark April 2nd on your calendars as a new holiday: The official birth of the American Oligarchy.

The Supreme Court handed down its decision in McCutcheon v. FEC, another campaign finance case aimed at eliminating limits on individual contributions to federal elections. The plaintiffs claimed that their First Amendment rights were being violated because they weren’t allowed to donate an endless stream of cash to their favorite politicians.

According to the New York Times, “…the court’s decision Wednesday in McCutcheon v. Federal Election Commission struck down as a violation of the First Amendment the aggregate limit of $123,200 that an individual could divide up among candidates and parties. Because such a limit would prevent Shaun McCutcheon, an Alabama businessman, from giving $1,776 to many Congressional candidates, and a bit more to a few others, it could not be justified as preventing corruption or its appearance.” The language regarding corruption prevention or appearance thereof came from the 1976 Court decision in Buckley v. Valeo, which basically stated that people could spend an infinite amount of money supporting themselves or purchasing advertising to advocate for their favorite candidate, but could only donate a limited amount to the campaign itself to prevent corruption or its appearance. The decision in McCutcheon essentially eliminated that limit. “There is no right more basic in our democracy,” Chief Justice John Roberts Jr. wrote in the opening of his opinion for the court in McCutcheon v. Federal Election Commission, “than the right to participate in electing our political leaders,” as quoted in the Times.

Score another victory for the 1% and the .01% in their never-ending quest to purchase our government piece by piece. And in the long run, the short run, and every other run, the only people who will benefit from this latest debacle of a decision are the wealthiest people in our country. I mean, who else can donate $100,000 to a political campaign and then complain that they wish they could have donated more?

I suppose that this should be no surprise whatsoever. The last president to come from any sort of regular blue-collar background was Jimmy Carter. The last president to attend a non-Ivy League school was Ronald Reagan. According to Time, more than half of Congress is comprised of millionaires. According to the Center for Public Integrity, at least five of the nine Supreme Court Justices are millionaires as well.

The point behind all of these statistics is that our government is no longer occupied by what most of us would regard as “We the People.” It is occupied by the wealthiest members of society who are too easily convinced that other wealthy people are somehow inconvenienced by such nuisances as paying taxes or limits to campaign contributions. It would seem that their argument for smaller government and fewer rules only applies to any limitation that applies to their ability to buy the country and its government for a song.

Article I of the Constitution specifically forbids the United States’ government from granting any individual a title of nobility. The framers knew all too well the dangers of a society in which there was a ruling class of people who got to hang on to power simply by having the good fortune of being born to the right family. Decisions like Citizens United and McCutcheon give the wealthiest 1% the next best thing: The ability to have undue influence in elections simply by virtue of being born in the right family or set of circumstances. In essence, this is tantamount to a title of nobility.

We all know this is wrong, and We the People need to do something about it before Tom Perkins and others of his ilk convince the government to allow them to have more votes because they pay more in taxes. (FYI, this is the way voting works in corporations; the more shares you own, the more votes you get.)

Some specific actions we can take is to petition our state governments to ask for a constitutional convention to propose an amendment requiring the public financing of elections. This is no small task, as 2/3 of state legislatures are required to request such a convention before on must be called, but it can be done. Failing in that, we could also demand that those elected leaders that represent us call for the same constitutional amendment, or face the possibility of losing the power they’ve so carefully gerrymandered their way into.

In the mean time, get the word out to as many people as you know that our government is no longer working for We the People, and is instead upholding the interests of We the 1%. By getting as many people behind this movement as possible, we can force the government to change its regressive policies that are taking us back to the Gilded Age. But, we need to act soon, before the rich go back to lighting their $1000 cigars with $100 bills to congratulate themselves on the hijacking of democracy.