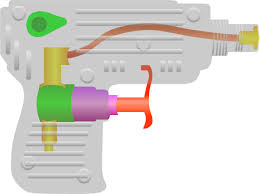 Finally, Florida is going to do something about gun control in their state. Squirt-gun control, that is.

Of course, no one can really know the answer to that question based on the facts of Borge’s case. She got into a fight with her boyfriend, and chose a non-lethal method of expressing her anger, and got thrown into the klink for it. George Zimmerman killed Trayvon Martin after getting into a fight with him, and today he walks free.

These facts in and of themselves prove that we are now living in a completely backward country. Apparently, at least in Florida, you can get into more trouble for resorting to non-lethal violence than you can for using lethal violence. Their squirt-gun control is more restrictive than their control of real guns.

And therein lies the problem. Here in Michigan, acupuncturists, audiologists, chiropractors, therapists, social workers, doctors, pharmacists, teachers, and veterinarians are just a small sampling of the list of people who must  submit fingerprints at their own expense  for a federal background check in order to get their license. These licenses are necessary for them to maintain gainful employment.

However, gun owners are not required to submit any sort of fingerprints for a background check, despite the fact that a majority of them do not need their guns to maintain gainful employment. In some other states, gun owners are not required to submit to any sort of background check, much less one that expires every two years like the one teachers in Michigan have to get every time they get hired by a new employer.

In spite of such tragedies such as the 2011 shooting in Tuscon Arizona where U.S. Rep. Gabrielle Giffords was shot in the head at point blank range among 19 others who were wounded or killed, or the Aurora, Colorado shooting at the movie theater where 71 people were wounded or killed, or the Newtown, Connecticut shooting where 27 people were killed, or the most recent mass shooting in September of this year in the Washington, D.C. Navy yard where at least 12 people were killed, media coverage has been brief and fleeting at best. It’s always too soon to have a discussion about the shooting as media pundits beg for time for the families to heal until the shootings find their way out of the news cycle.

Now, network news media has turned to underreporting new shooting tragedies. According to ThinkProgress, the release of Apple’s new iPad got more press and was mentioned more on October 21 than a school shooting in Sparks, Nevada in which a seventh-grader brought his parent’s handgun to school and shot a teacher, two 12-year-old boys and himself. It is truly a sad state of media affairs when Fox News, MSNBC, and CNN all mention the release of an electronic device more than a school shooting.

A society where devices for mindless entertainment and surfing the internet gains more notoriety than a real tragedy that would normally get national media attention for days is a society with skewed priorities. A society that places tighter restrictions on toy guns than real guns is a society that has missed the mark altogether. This is the society that we live in today.

Our government is clearly no longer a government by the people and for the people. It has become a government where lobbyists for the gun manufacturers pushing to loosen background check requirements get more attention than an ordinary citizen who has to take time off from their normal job to lobby Congress at their own expense for tighter checks. Politicians consistently worry more about raking in campaign funds from the same hundred or so donors, doing what it takes to make them happy, and gerrymandering Congressional districts so they never have to worry about listening to voters who demand effective change.

In short, our system is completely broken. The steps to bringing back a sane and civil government as well as a sane and civil society are as arduous as they are large in number. But, it can be done. A start would be background checks at least as tough as what a teacher or a doctor might have to undergo to maintain gainful employment. Another would be to severely reduce the private funding of political campaigns  and eventually replace that system with one that allows private donors to make donations to public campaign funds.

Sound ideas as these may be, those that have the power to make these changes have no incentive to make those changes because they might lead to them (gasp) getting voted out of office for enacting unpopular legislation and holding unpopular opinions. We the people are supposed to have the power over our politicians, not the other way around. Before you go to the polls in November 2014, be sure to check out your Representative and see what they really stand for. If you live in a state that has a Senate seat up for grabs, check out the incumbent to see if they deserve to keep serving. If not, remember that we the people still have the power to unseat those who do not act according to our wishes.