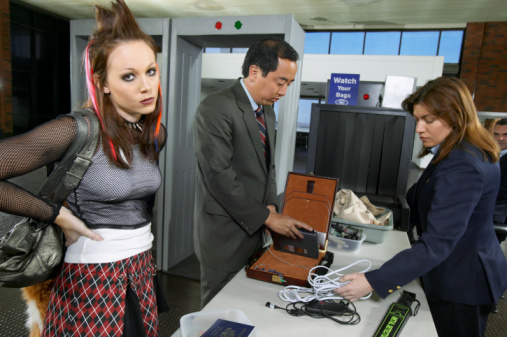 According to an article published on ajc.com/news, a Sikh advocacy group known as the Sikh Coalition has created an application for iPhones and Androids to expedite filing reports of unfair screenings conducted by Transportation Security Agents.  The article also notes that passengers can ask to speak to supervisors or customer support managers at an airport, contact the TSA Contact Center, submit feedback through “Talk-to-TSA” online or file a civil rights complaint through its website.

I would like to pause for a moment to let the applause begin.

The Transportation Security Agency has been charged with keeping America safe from terrorists since September 11, 2001. Slowly, but surely, Americans have found out what the government really means to do with the personal liberties some people willingly parted with in exchange for a little bit of safety.

Some notable incidents of overzealous airport screening have gone viral, such as TSA bursting a man’s urostomy bag during a pat-down, TSA patting down a toddler who couldn’t hold still for the body scanners, TSA examining a woman’s fake breast because it was flagged as a trouble area on the same body scanners, and my personal favorite, a TSA agent forcing a woman to drink about half of the breast milk she was carrying onto the plane with her to feed her infant, the rest of which had to be thrown out because it was no longer sterile.

Since 1972 when some morons hid a bomb on a plane, people have had to deal with airport security. Prior to September 11, 2001, that was primarily limited to walking through a metal detector and having your bags X-rayed to check for contraband. Every once in a while, the drug or bomb-sniffing dogs would be brought out to examine a suspicious piece of luggage.

However, 17 other morons changed that forever when they somehow managed to get box cutters on their respective planes with the intent of bringing America to its knees. In the wake of this, the TSA was created and given unilateral government authority to regulate airports, and therefore given a monopoly on airport security.

TSA wasted no time conducting invasive searches, patting down toddlers, and even went as far as to investigate baby and adult diapers alike. Full body scanners were installed which showed an outline image of what the person looked like under their clothes, and identified areas that could be trouble. Most of these “trouble areas” turned out to be implants, replacement joints, or other medical devices people would rather the public not know about.

None of this stopped TSA from investigating these things on the off chance that a terrorist had hidden a bomb in a baby’s diaper, or in a urostomy bag. This was done at the expense of the dignity of the person in question.

Evidence also shows that Sikh men were required by TSA to remove their turbans, which they wear for religious reasons,  and many law-abiding Muslims were singled out based purely on their faith.

This app will hopefully expedite the process by which complaints of unfair screenings are filed. If the government is made more aware of their constituency’s upset regarding these violations of basic human rights, they will have no choice but to return to privatization of airport security.

Florida has already recognized the danger of the TSA airport security monopoly and their abuse of the unilateral authority bestowed upon them by looking into replacing TSA with private security companies who will not only be backed by the full faith of the government, but will also have to uphold a reputation of respectful screenings because they can always be replaced with a different company.

If you fly a lot, or would just like to have the app in case you feel you have been unfairly scrutinized the next time you fly,  you can find it at http://www.fly-rights.org. If you don’t have a smartphone, complaints against the TSA can be filed at http://www.tsa.gov/what_we_do/civilrights/filing_a_complaint.shtm

You can also visit the Sikh Coalition at http://www.sikhcoalition.org

Senator Rand Paul is sponsoring an initiative to completely privatize TSA, and eliminate their government-backed, monopolistic control over airports. Go sign his online petition at http://www.chooseliberty.org/tsa_sign.aspx?pid=0501n