The August 24 edition of the Free Press contained a short article stating Moody’s bond rating agency has called Lansing’s proposed fix of the teacher pension system “credit positive.” To be fair, the fix is anticipated to save school districts $850 million over two years, according to the article. However, the fix plans to realize that savings on the backs of retired and current teachers by reducing the amount of compensation retirees receive and requiring current and new teachers to contribute more to the system out of their pockets.

I have already written at length about what an egregious violation of past collective bargaining and government agreements with teachers. (http://www.noizenews.com/archives/10629) I will now present the reason why I believe that Moody’s should not be trusted in this rating, or any other rating they might give.

Just prior to the mortgage bubble burst of 2008, Goldman Sachs realized that it had tons of mortgage debt that it knew had no chance of being repaid. It decided that it was going to take that toxic debt and package it into investment bonds and sell it to investors as such. Moody’s jumped right in and gave these bonds a AAA rating.

Goldman Sachs knew that these bonds should have been rated as junk, and knew that they were going to fail. Yet, they sold them as AAA-rated bonds, then bet against their success so that when they failed, they could still make a profit while the investors got ripped off.

Moody’s was questioned regarding their rating of these bonds, which were discovered in a Senate hearing to have been fraudulently sold as AAA bonds because of the evidence that showed Goldman bet on their failure.  They were asked why they gave the bonds a AAA rating when it was obvious based on cursory examination of the associated documents that the bonds should have been given a junk rating.

Moody’s response was that the ratings they give are an opinion, and every once in a while, their opinions are wrong. What is interesting about this is that prior to this, Moody’s independent ratings were considered to be the gold standard of rating investments. Their “opinion” is regarded as fact in many investment circles because it is believed they are independently evaluating the safety and security of the investments.

Based on their evaluation of Goldman’s crooked investment schemes, their rating of Bernie Madoff’s Ponzi scheme, and other recent gaffes in evaluating investments, I would argue that we should not trust Moody’s evaluation of Michigan’s pension fix.

In other words, they are making teachers pay more into a failing system so that it won’t fail. They are taking money from people who believed they had exchanged a pay raise for a comfortable retirement so that both will effectively be canceled out.  This is going to delay retirement for many teachers, thereby limiting the number of openings that are available for new teachers while districts continue to pay the salary of a 25 or 30 year veteran.

The pensions system fix may be “credit positive” for school districts, but what about the people who invested in the pension system? Where is their positive credit? It sounds to me like their bank accounts and paychecks are going to be “credit negative.”

How many more cuts in compensation can teachers endure? Why do politicians in Lansing believe that they can cut teacher wages, cut the K-12 School Aid Fund, cut teacher pensions, cut teacher health care, and attract the best and brightest while they are doing so? I thought that Michigan Legislature would want to supply all their business cronies with well-educated employees so they can use that $1.4 billion in tax breaks to do some hiring. I guess they would rather have higher CEO pay and bonuses than a well-educated public.

What would Rick Snyder have done at Gateway if the company told him that even though he’s CEO, they were going to cut his salary by 10%, force him to pay 20% of his health care costs, and to kiss his pension goodbye unless he contributed to a private 401(k) or more to the pension fund? Sue, that’s what.

All teachers that were covered under the old pension system should bring a class action lawsuit against the Michigan government for violating the Contracts Clause of the United States Constitution, which states that “No State shall…pass any any Bill of Attainder, ex post facto Law, or Law impairing the Obligation of Contracts, or grant any Title of Nobility.

Somebody please vote these people out in November before teachers are reduced to minimum wage with no benefits, no pensions. and no employer-provided health care. The last thing Michigan needs is for Wal-Mart to be attracted to for-profit charter schools as part of their business model. 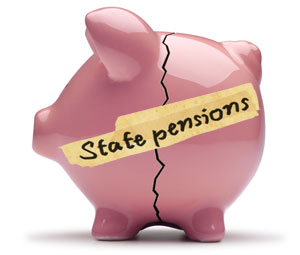 Lansing legislators are again showing their true feelings toward educators.

First, they moved to remove collective bargaining rights from teachers. Then, school districts began imposing 10% pay cuts without negotiating stateside concessions. Next, the legislature moved to force teachers to pay 20% of their health care costs out of the salary that has been reduced by 10%.

Now, the legislature has passed a bill that will drastically change the public pension system for teachers. The proposed changes will not only require current teachers to pay more into the system or convert to a private 401(k), but will also reduce the amount of money current retirees are receiving and reduce their health care benefits.

As a second-year educator, I am outraged, disgusted, and insulted by these proposed changes. At one point in time, back when collective bargaining agreements had the force of a contract, teachers negotiated a public pension plan in lieu of a pay raise. The idea was that since the state couldn’t afford to give teachers pay raises at the time, at least the state could provide for teachers in their retirement.

Rick Snyder, already proving himself one to not uphold agreements made by previous administrations with the Detroit revenue-sharing agreement, will no doubt sign this legislative atrocity into existence thereby nearly completing bis agenda of forcing educators to prove that they are not in it for them money.

To be fair, the pension system is in dire straits. Changes to the program do need to be made, but why not change it so that teachers aren’t forced to subsidize their jobs, health care, and retirement? Why not repeal the changes to the Michigan Business Tax and reinstate it as a flat 2% tax with no loopholes? Why not ask people across the state for 0.1 mills of new property tax to finance the failing system?

The answer to those questions are simple, and the same: Because Rick Snyder and the Lansing Legislature believe that $1.4 billion in tax breaks for their business cronies are more important than the teachers that provide them with educated employees. Tax breaks for industries that don’t need them trump the retired teachers that gave the politicians enacting them the education they needed to run for office then rip them off for their pension money.

Based on this latest move, it is apparent that Lansing is not interested in attracting the best and the brightest from this or any state. They would rather allow for-profit corporations run cyber-charters so they can outsource education to the lowest bidder. They would rather trample on the collective bargaining rights of teachers to pay for egregious tax breaks that the state can’t afford and the recipients don’t need.

I hope every educator remembers in November that this Legislature would rather give $1.4 billion in tax breaks to their business cronies than have educators who are properly compensated for their long hours and otherwise generally thankless job. I hope every parent remembers in November that the reason teachers can’t afford to purchase facial tissues, pens, pencils, and other emergency supplies is because of Lansing’s war on teachers.