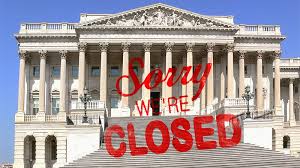 House Republicans have been threatening to shut down the government over either delaying, defunding, or completely repealing President Obama’s signature legislative achievement pretty much since the law was signed into being in 2009. So far, they have wasted over 40 separate “symbolic” votes to repeal the ACA, knowing full well that such a measure could never pass the Senate, and would be subject to a presidential veto if somehow the measure passed to the President’s desk. (That’s several million dollars of taxpayer money wasted.)

Up until this point, shutdown was avoided in 11th hour agreements that only amounted to band-aids that attempted to stop the bleeding from the femoral artery of our government’s deficit and debt ceiling, albeit they were craftily designed not to be a permanent solution. It seems that House Republicans have not grown tired these past five years of holding the government hostage to their twisted ideology. Their misguided idea is that the ACA will somehow bring doom and gloom to small and large businesses alike, causing them to hemorrhage jobs, and that somehow the government will be able to dictate which doctors and hospitals you will be able to go to.

The truth could not be further from their beliefs. Since the individual mandate portion of the ACA requires all Americans to purchase health insurance from existing companies, it is still insurance companies who are limiting choices in terms of doctors and hospitals. No doubt, insurance companies are limiting health care options for consumers so they can offer broadened stock and salary options to their upper management all while showing on paper they are using 80% of their proceeds to pay for their customers’ health care.

As far as businesses being “forced” to lay people off or reduce full-time employees to part-time hours, that can be chalked up to good old-fashioned greed. The CEO’s of the companies laying people off and cutting hours never even once thought of reducing their own salaries by 10%, which might translate to millions in savings for their company. They would rather see their employees forced onto the state exchanges or onto the state unemployment system than forego the Bentley they plan on purchasing next month, even if foregoing that Bentley would save their own company.

Yes, House Republicans would rather seem hundreds of thousands of workers be furloughed without pay, see Medicare and Medicaid payments delayed, see delay in the processing of new veterans’ benefits claims than fix what they claim to be broken in the ACA, propose viable legislation of their own, or pay America’s bills. (The deadline to increase the debt ceiling is a mere 16 days away, and will probably result in yet another showdown in Congress.)

This government shutdown and the forced furloughing of workers of course will lead to these workers applying for unemployment benefits in their home states, and has been magnificently timed to coincide with the implementation of the ACA health insurance exchanges. When unemployment numbers for October show an uptick in unemployment claims, the Republicans are sure to pounce with a claim that the ACA somehow caused this uptick in unemployment. However, instead of telling the truth about how they perpetuated the increase in unemployment, they will try to claim that businesses have started mass layoffs to curb supposed mass price increases. (A complete farce of its own.)

The absolute truth of this matter is that our nation is quickly becoming the laughing stock of the world. From the outside looking in, Congress amounts to a nursery full of babies ready to throw a temper tantrum the minute they don’t get every last thing that they want. They see 1/30th of our total government power taking control of governance that is supposed to be decided by majority rule. They see political leaders disenfranchise their own constituents in an attempt to cling desperately to power while we cry for UN sanctions and the bombing of despotic leaders in other countries that do the same thing.

Most of all, they see a nation bitterly divided over providing affordable health care to millions of Americans forced to do without it. They puzzle over why it is that we rely on a privatized health care system in which people can be denied lifesaving treatment because an insurance company purposefully wrote conflicting clauses into the contract to avoid paying benefits. Even the most conservative members of their government realize that a single payer health care system in which no one is denied treatment is the moral and just thing to do.

Yet, here we are, shutting down the government over forcing insurers to provide quality, low cost insurance to people with low incomes, pre-existing conditions, or a combination thereof. Congress is refusing to do its constitutionally mandated duty of paying the nation’s bills and passing legislation, which is grounds for impeachment. Since the House is technically in charge of drafting impeachment charges, the next best bet is to vote the bums out in 2014.

Apparently, the issue is so hotly contested, that both companies have felt it necessary to take out full page ads in the Free Press to present their side of the issue, and bash the other side for not being more conciliatory. Caught in the middle of this debacle are about 100,000 patients who are facing the very real possibility that their insurance may not be accepted at Beaumont Hospitals in 2012. Beaumont has offered neutral third party arbitration, while Blue Cross has rejected this idea as “unprecedented and a negotiating tactic” according the the Free Press.

The world of insurance is dizzyingly labyrinthian in its policies and operation. However, it is sold to millions of Americans on the surprisingly simple premise that if they have insurance, they will be responsible for a small fraction of the total medical care bill they incur. The idea is to protect them financially from any unforeseen medical circumstances that may befall them.

Doctors consistently complain about the delays in reimbursement for care provided from insurance companies. Insurance companies busy themselves with determining whether or not a medically prescribed treatment is actually covered under the provisions of their insurance. Generally speaking, any procedure that is considered to be “experimental” or “an elective procedure” are not covered, and the patient is left to foot the bill.

The latter statement necessarily begs the question, “What is experimental, or an elective procedure?” Those decisions are left not up to doctors, but to CEO’s and other upper management types who majored in business, not in medicine. An even better question at this point is “Why are we letting a CEO with a master’s in business administration overrule a physician who has had seven or eight years of medical schooling, another few years of residency, and any number of years in school learning their specialty as well as practicing medicine?”

No one that I have talked to has been able to answer that question in a satisfactory manner. However, the result of these “business decisions” have seen patients of all walks of life saddled with the full expense of a medical treatment that a doctor deemed to be necessary. Doctors have also had to fight tooth and nail with insurance companies over payment for services rendered to a patient who bought insurance in good faith, believing that just about anything a doctor told them was needed in order for them to feel well again would be covered less some sort of co-pay.

Sadly, it is evident that the rift between insurance companies and the doctors that provide the care that insurance companies are supposed to reimburse them for is growing wider. Even as the battle between Beaumont and Blue Cross rages on, patients who should still technically be covered by their insurance are experiencing delays receiving necessary approval to get certain tests or to see specialists concerning their maladies.

Barack Obama has met widespread opposition to Obamacare, which would prevent insurance companies from rejecting applicants for insurance based on preexisting conditions, force insurance companies to report where their money is going, and ensure that 80% of their money is going toward improving patient care and making them feel better. Noble goals to be sure, but it also carries a provision that all Americans must purchase some type of insurance so we won’t have nearly 59 million in this country without it.

Critics of the plan say the required insurance provision is unconstitutional and will only serve to be a boon for insurance companies. Those who rally to support it say that it is important to regulate insurance companies, and make sure that everyone has an equal opportunity to get insured despite a condition they have no control over.

Either way you weigh in, it is clear that America’s health care system is in dire straits. Costs keep rising, insurance companies keep balking at paying, and John Q. Consumer is caught in the middle of a battle between those who profit from denying necessary care (insurance companies) and the hospitals who desperately want to provide the care.

It seems that binding arbitration may be the solution, but Blue Cross and Beaumont have reached an impasse at even agreeing to disagree and letting someone else make a decision about what happens. I wonder if either side thought about asking what the patients want out of this argument. My guess would be no, because they both know that the patients simply don’t want a cloud of potential financial ruin hanging over their head the next time something goes wrong with them that they need to get fixed.

The very fact that the health and well-being of over 100,000 people may be threatened by a corporate pissing match is morally repugnant and should be stopped. The federal government should step in and regulate insurance company reimbursements so fights like this won’t happen again. They should require insurance companies to act in good faith negotiating reimbursements, and when that fails, require them to still honor their old reimbursement agreements rather than leave patients out in the cold with a fist full of medical bills.

Another solution would be to require all insurance companies and health maintenance organizations to run a a non-profit public service, or to just step in and run the companies themselves as non-profits until disputes can be settled. Government-appointed CEOs worked for fixing the auto industry, why wouldn’t it work for the health care industry?

Either of these solutions seems much better than a hospital turning its nose up at an insurer who refuses to negotiate reimbursement rates and forcing patients to be mindful of where they might be referred by a physician to get medical care. They also seem worthier than an insurance corporation playing hardball against a hospital who only seeks to give its patients the best medical care possible. Both sides need to realize that they are in an industry that should be paying more attention to the needs of its clients rather than the needs of their own pocketbooks.