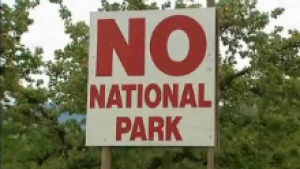 According to ThinkProgress, House Republicans have scheduled a vote on H.R. 1459, which  would “aims to block presidents from using the Antiquities Act of 1906 to establish new national monuments by putting caps on how many times it can be used, requiring congressional review of proposed monuments, and forcing local communities to engage in an ironic exercise of reviewing the environmental impacts of protecting lands for future generations.” (Not so) coincidentally, the vote is scheduled the one-year anniversary of President Obama’s establishment of monuments honoring Harriet Tubman and Colonel Charles P. Young, according to the article. This action would overturn the 1906 Antiquities Act, passed during Theodore Roosevelt’s administration. (Before you all hop on your commenting machines, I know Roosevelt was a Republican and it’s a darn shame we have to go back more than 100 years to find a good one.)

The article also states that “the Center for American Progress found that: By a margin of more than three-to-one, voters believe that leaders in Washington should be creating new pars and expanding opportunities for Americans to get outdoors, instead of closing national parks and cutting budgets for public lands.”

Not that Congressional Republicans really care any more what the American people think. This much they demonstrated in last year’s legislative session when they passed a measly 57 total bills to the president’s desk for a signature. This year is shaping up to be no different as they just recently logged their 50th attempt to modify or repeal the Affordable Care Act, which to date has enrolled more than 5 million people for affordable health insurance and now are pursuing a measure that people oppose by a 3 to 1 margin. In an election year, no less!

Of course, thanks to the Citizens United decision, Republicans only have to listen to what their major donors have to say. And their donors say it through financial campaign contributions, which is now considered to be protected free speech according to the Citizens United decision. Therefore, they don’t have to pay any sort of attention to people who can’t afford to contribute to their campaign funds, or who can only afford to chip in a few dollars.

This has all become part and parcel to our broken electoral system. A system of corrupt campaign finance where certain individuals (mostly the top 1% and .01%) want to be able to “express their free speech” through monetary contributions, but don’t want anyone to know which politicians they are donating their cash to out of fear of capitalistic reprisal. A system where the rich get more speech just because they have more money, and the poor gets no speech because they’re broke. A system where the rich believe they are entitled to more than one vote in our democracy because they have more money, which is the way that it works in corporate elections.

We the people need to cling to our one-person, one-vote democracy with all that we’ve got. We may not have money, we may not have political clout, but we still have 99% of the vote, while the wealthiest members of our society who seek to dismantle it for their own profit have just 1%. It’s quite obvious why they believe they deserve more votes, which makes it even more obvious why we need to resist them at every turn.

This year we need to show the so-called “monied elite” in this country that they are just flushing all of their ill-gotten gains down the toilet. We need to show them that no matter what disinformation they may spread, no matter how many shell corporations they set up to hide their campaign contributions, no matter how they try to buy our elections, it’s all for naught. We can do that. We have the power. We just need to exercise it.

This year, make darn sure to go to the polls with your best voting pen and vote every last one of the bums who are causing Congressional gridlock out. Vote all the members of Congress who voted yes on any of the 50 votes taken to repeal or gut the Affordable Care Act. Vote out anyone who advocates cutting Social Security, Medicare or Medicaid. Vote out anyone who seeks to limit a woman’s reproductive freedom without so much as a mention of how they will help these women have a healthy baby during and after their pregnancy. Most of all, vote out anyone who votes for this egregious bill, or goes on record as stating that we should open up our nation’s most beautiful natural treasures to businessmen who will quickly turn them to a wasteland.

When Teddy passed the presidential torch to Taft, he fumed for four years over the way Taft ran the country. He hated Taft’s actions so much, he created the Progressive Party (later re-named the Bull Moose Party) to run as an independent against Taft. He and Taft split the vote, leading to a Woodrow Wilson win. If good old Teddy were still alive today, I have no doubt he would be leading the charge against today’s Republicans and denounce them for the charlatans they are. We need to take a page out of Teddy’s book and make sure that no one who goes against what a majority of the people are in favor of retains political power.