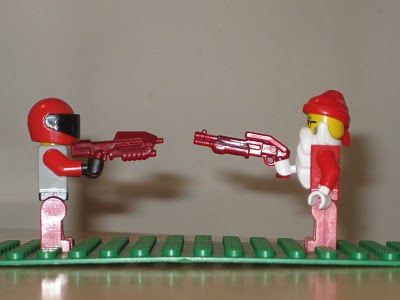 By now, many people have heard about the actions of James E. Holmes in Aurora, Colorado. The airwaves and the internet are rife with stories that retell the horrifying story and bemoan the what a terrible tragedy this latest shooting is.

However, the subject that most needs to be aired is swept under the rug with the images of police searching the suspect’s home, defusing booby traps and floating heads with tears in their eyes. I have yet to hear any of the major news syndicates, right-wing politicians, or much of anyone else talk about the need for Congress to explore increased regulation of assault-style rifles and large-capacity magazines.

The Second Amendment of the Constitution states: “A well regulated militia being necessary to the security of a free state, the right of the people to keep and bear arms shall not be infringed.” So far, the Supreme Court has found that this statement means that everyone in America has the right to own a gun, with a few notable exceptions for those with criminal records and mental disorders.

I believe that people should be able to own guns in order to defend their home, to participate in target shooting, to go hunting for food or sport. None of these potential uses for a weapon by a civilian involves people having the right to own any sort of assault rifle or clips that hold large amounts of ammunition.

Indeed, only a “well-regulated militia” really has any need to have weapons that fire several hundred rounds per minute and use high-capacity magazines. Only a “well-regulated militia” has the training to use these weapons, and that training involves only using full auto when someone in the fire team needs to provide covering fire. This demonstrates that even the military acknowledges that automatic weapons are extremely difficult to aim when they are set to full auto and are really only good for spraying a whole bunch of bullets in a relatively short period of time.

Yet, the conversation about this tragedy isn’t focused on how we might prevent something similar from ever happening again. In fact, if you go back to similar tragedies (Columbine, Virginia Tech, etc.) the conversation never involved limiting the types of weapons your average person is able to buy legally. That issue was always swept under the rug with the images of police conducting investigations, families bawling their eyes out over lost loved ones, and ensuing memorial services.

We as the American people should be demanding those who represent us in Congress devise common-sense regulation that bans civilians from owning any sort of assault-style rifle or large-capacity magazines in a private capacity. No one (and I mean no one) has designs to take down any sort of animal with a machine gun. They and I know that there would be nothing left of the animal if they unleashed a hundred rounds of ammo it in less than 30 seconds.

We as the American people should be demanding that people should not be able to go to gun shows and walk out with a gun on the same day, that the gun dealers at these shows do their background checking due diligence and then arrange for the delivery of the gun to the purchaser.

Nothing can stop people like James E. Holmes from carrying out their intended goal if they are seriously motivated. Completely banning all guns is certainly not the answer to stopping shooting tragedies from happening. But, if we embrace a ban on civilian-owned assault rifles as well as limitations on how much ammunition one can buy at any given time, we might slow them down a bit.