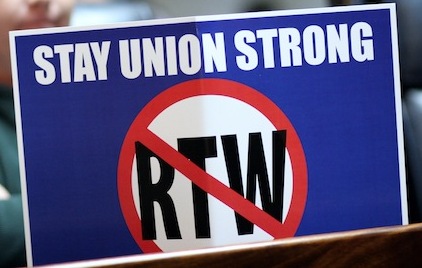 Yesterday was a dark day for the labor movement as Governor Rick Snyder recanted on yet another promise to not pass legislation he claimed was not on his agenda as governor by signing the Right to Work bill. Union members from all corners of the state swarmed Lansing to support and protest the bill.

Wait a minute…support AND protest?

Television news reports on virtually every local Detroit station showed union and non-union members nose to nose arguing about whether or not they should be required to pay union dues or even be part of a union as a condition of employment.

Supporters of right to work screamed about having money taken out of their pocket that they could use to feed their families or possibly negotiate a better labor deal. Opponents howled that they are paying for services rendered by union attorneys and arbitrators among the many others who draw a salary to enter into negotiations with big corporations for better wages, benefits, and a due process clause in the contract for terminations. Anyone who opts to not join the union or pay the dues for these things yet still enjoy the protection of the union are freeloaders according to opponents of right to work.

While I tend to agree that right to work is the equivalent of legislating entitlements, and somewhat akin to making paying taxes optional, the real message here is that big money special interests have managed to drive a wedge squarely down the middle of workers.

And that’s exactly the way that big money special interests want it.

CEO’s across the country would much rather have their workers fighting and bickering over whether or not everyone who works in a closed shop should in fact be required to be part of the union and pay dues. While the workers are focusing on whether or not the person working next to them is a union freeloader, attention is diverted from upper management as they pillage the pension fund to pay for their mismanagement of company resources.

As workers battle over what they perceive as the inflated salaries and benefits packages of union bosses and argue about why their hard earned dollars should pay that salary, big bosses are sitting back and relaxing as they collect more money in an hour than those workers make in a month. Narry a word is exhaled regarding whether the CEO is working 250 times harder than the average line worker while he earns 250 times more than the average line worker.

To paraphrase Samuel L. Jackson, I seriously suggest that union and non-union members wake the hell up.

Michigan’s new right to work law amounts to nothing more than an attempt to start a civil war within labor, to turn people against each other who should be working together to ensure their contributions to the company in the form of productivity is recognized.

Workers in union shops should realize that every dollar they take out of union coffers by electing to not pay dues hurts the process of collective bargaining. The attorneys, arbitrators, and other staff in the union offices won’t work for free, much like corporate lawyers and arbitrators won’t work for free. The difference is that corporate boards most likely don’t squabble about whether or not they should use company profits that could go into their pocket to pay for these services. They simply appropriate the money, hire the best in the business, and set about their goal of making greater profits while paying their workers lower wages and fewer benefits.

The same sort of divide and conquer strategy was used by the British in Rwanda and is the perfect distraction and decimation tactic. If people are busy fighting over who is the favored one, no one is paying attention to why one party is being told they are the favorite as the overlords move in. Then, everyone is surprised when they have no rights, no representative leadership, and no way to change the status quo.

Well, the status quo has changed, and it has changed in favor of large corporations and CEO’s who could care less for the welfare of their employees so long as the shareholders are happy and they get their golden parachute.

Never mind that they employees pledged 28 cents from their last 30 cent raise to go into that pension funds, so long as they get to plunder it whenever they make an accounting mistake. Never mind that 100% of the CEO’s earned assets are protected from corporate bankruptcy so long as they get 300% raises as an incentive to stick around to try and correct the mess they created. Heck, don’t even try to correct the mess, because the corporation will protect their money and ensure they get their contracted retirement plan, all while squeezing the workers to get it. You could even hire Bain Capital to saddle the company with piles of debt it doesn’t need in an attempt to justify that theft.